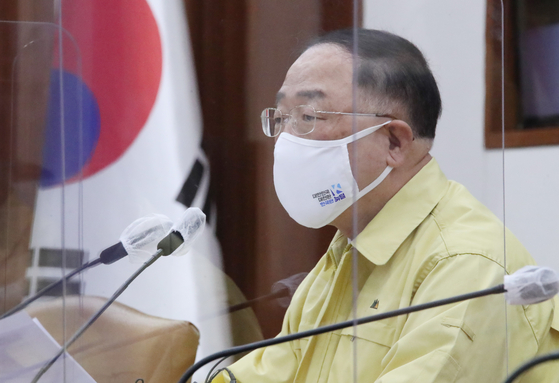 
A full 90 percent of the third round of relief grants will be distributed before the Lunar New Year holidays next month, Finance Minister Hong Nam-ki reaffirmed.

He also emphasized that the government has secured 1 trillion won ($921 million) to pay for Covid-19 vaccines made by Cambridge, Massachusetts-based Moderna needed to vaccinate 20 million people.

“Starting today, those eligible for the funding for small shops and employment stabilization funds will be notified, and distribution will start Jan. 11,” Hong said during a government emergency economic meeting held Wednesday. “We will focus all of our efforts so that 90 percent will be distributed before the Lunar New Year holidays.

“The point is swift execution,” Hong said. “We need to act quickly.”

On Dec. 29, the government said it will create a 9.3-trillion-won emergency package, with funding from this year's budget as well as budgets reserved for emergencies, such as disasters like earthquakes, and the repurposing of government funds, such as the National Sports Promotional Fund and the Tourism Promotion and Development Fund.

The package includes a third emergency relief grant, where 4.1 trillion won will be used for 1-million-won to 3-million-won grants to businesses that have been affected by the strict social distancing regulations implemented since November.

It also includes a maximum 1-million-won allowance granted to freelancers, including door-to-door salespeople.

This package was at the top of the agenda during the government's first cabinet meeting of the year on Tuesday, and it was greenlit.

Public fatigue from the tightened restrictions has been building rapidly, especially among small shops forced to close down and indoor gyms, which are now barely hanging on.

A gym owner committed suicide on Jan. 3, and some of the gym owners across the country, who have been forced to close, have announced that they will resume business even at the risk of fines.

Other small businesses have also started to vent their frustration over the confusing government regulation, such as restricting coffee shops to only allowing takeout while allowing brunch restaurants to resume business as usual.

Small shop organizations, including the Korea Federation of Small and Medium Businesses, which represents mom-and-pop shop owners, on Tuesday requested the Constitutional Court’s judgment on whether the Seoul city government’s social distancing restrictions are constitutional.

At the meeting, the finance minister also laid out the government’s vaccination plan.

“After paying 1 trillion won for the vaccine purchase, including an advance payment to Moderna, we will get prepared so that starting February, the vaccination of medical workers and the elderly will begin,” Hong said.

“This year, we will frontload at a record pace, with the central government at 63 percent, local government at 60 percent and local education at 64 percent,” Hong said, in reference to first-half spending.