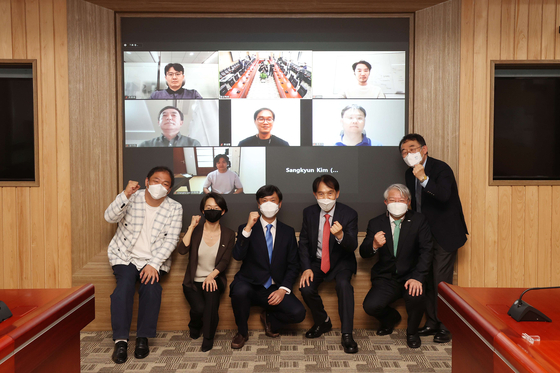 Donors from Krafton and KAIST President Lee Kwang-hyung pose at an event celebrating an 11 billion won($9.9 million) donation at KAIST in Daejeon on Friday. [KAIST]

Korea's top engineering university said Friday that a large chunk of the donation, 5.5 billion won, comes from 11 former and current executives or employees who graduated from KAIST, while the balance comes from the Seongnam, Gyeonggi-based company.

A portion of the donation will be used to extend the Department of Computer Science and Engineering building. The number of undergraduate students in that department doubled to over 900 this year from 450 in 2016.

“There is an urgent need for larger facilities to accommodate more students and faculty members so that they can research diverse areas and develop human-centered next-generation computing,” said a source from the department.

The new facilities will include computer programming rooms and venues for partnership programs that connect KAIST students with Krafton engineers.

The grant came after the Krafton’s founder and chairman, Chang Byung-gyu, gave 10 billion won last year to KAIST. Chang graduated from the Daejeon-based school after majoring in computer science and engineering.

He drummed up the latest donation along with Krafton CEO Kim Chang-han. They encouraged other KAIST alums to open their wallets.

“As KAIST graduates played an important role in growing the company, the donation will be used to nurture such talents who will help advance the industry in general,” Kim said in a statement.

Kim and other donors participated in an event celebrating the charity activity on Friday. KAIST President Lee Kwang-hyung attended and the institute signed a partnership to cooperate in supporting aspiring developers.