The change in consumer behavior caused by the coronavirus has led to a surge in online shopping, offering farmers new opportunities to sell their crops.

To allure consumers who are interested in where their produce comes from, farmers are setting up online and offline outlets that can provide such information. And that is particularly sought after due to consumers' heightened interest in health and well-being amid the pandemic.

Smaller outlets that offer a platform for farmers committed to fighting climate change have opened up, targeting consumers that are environmentally conscious. Some other companies are using offline channels to better explain how agricultural technology has advanced, allowing for diverse produce that is available all year round. 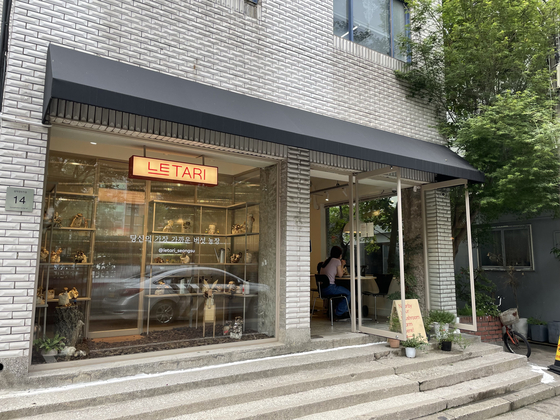 The small cafe was originally put together by four talents including Lee who are interested in urban planning. They wanted to make an impact in a smaller neighborhood to see if a bottom-up approach could work and inspire change within society.

“We thought about what people prioritize, and food is one of the items they want to know more and better,” said Lee. 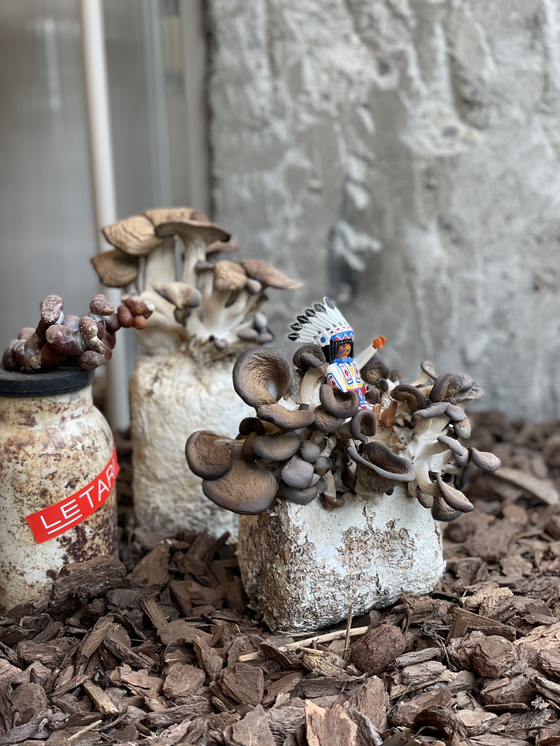 To entice passersby, the cafe displays dried versions of different neutari mushrooms alongside the window. The store serves a mushroom soup and a quiche made with ones it harvested for those who want to sample. Staff are on hand to explain more about neutari mushrooms, and what environment they favor and grow well in.

The four founders were no mushroom experts in the beginning. They visited Hwaseong, Gyeonggi, to work with a farmer and mushroom researcher. They get the cylinder-shaped culture ground for microbes from the farmer outside of Seoul to grow the mushrooms in the basement of the building which houses the cafe on the first floor. They continuously research the optimal growing conditions for mushrooms and have recently started growing pyogo mushrooms, better known as shiitake mushroom.

Whenever mushrooms grow big enough for a harvest, they post the news online and sell the raw produce. Usually sales happen once every week. They also sometimes bring their harvest to a nearby farmers' market called Groww Market. Many consumers were thrilled to learn that they could have an easy access to fresh harvest.

After a few weeks of doing so, the staff thought about offering customers the chance to grow the mushrooms themselves. To make that harvest possible at home, the shop is working with farmers to figure out what is needed and is preparing a kit.

“Just like this one shop has managed to change the perceptions of locals in this neighborhood, we will continue to find different inspiration to make society a little better place to live,” said another director Park Joo-hee of Monospace.

Marche was one of the first farmers' markets to see success in Seoul.

Even small farmers with limited quantities of harvests to sell find opportunities through Marche, gaining more confidence to make agricultural activities their main source of income. The market platform started in 2018 and holds its one-day farmers’ markets in Mapo District’s Seogyo, Jongno District’s Daehangno and Myeongdong, and Seongdong District’s Seongsu.

Farmers that grow hard-to-find herbs bring their harvests to cater to niche consumers looking to create fine-dining dishes from the comfort of their own homes. Since the market is open on a regular basis, the farmers and frequent visitors can build relationships and better understand supply and demand. Farmers also run social media accounts or open chat rooms to communicate with their regulars.

“The relationship between the farmers and consumers doesn’t just happen only at the farmers’ market,” said an official with Marche’s organizing team. The continuous conversation between farmers and consumers help each other understand better about how hard it is to grow vegetables until they are ready to harvest and what items are easy to cook and what is popular among home diners.

“If consumers have the same ideas as the farmers they meet at Marche and enjoy their vegetables, they keep in touch with them even outside the market to separately get a more regular supply of vegetables even when Marche is not on.”

Ggureomi, which means a package in Korean, is a collection of what becomes available on a certain day or a week from a farm and is sent to consumers. Consumers can either sign up for regular delivery of such greens and herbs or just buy each time they see a notice popping up from the farmers on social media. Such ggureomi is common as most of the farmers on Marche grow small quantities of many different vegetables, which means, the exact harvest day for certain items is difficult to forecast.

The platform thinks giving more support to farmers is one way to fight climate change.

“Maybe farmers are one of the biggest victims of climate change, but we think they are the ones who can be essential in solving the problem,” said the Marche official, adding that it is encouraging visitors and farmers to make better use of reusable utensils or bring containers and baskets to take their purchases home.

“To be able to give support to anyone who has at least once thought about climate change and what comes from it, we want to build up more vegetable markets across the country not only to share good eats but also to spread ideas for healthier lives for all.”

As Marche is gaining more recognition, there are many other similar markets popping up in the city. One that’s grown in size is Groww Market, which was first launched about a year ago.

Different from Marche which holds its markets only in northern Seoul due to its struggle to find a place in southern Seoul, Groww Market brings its market to Seorae Village in southern Seoul’s Seocho District alongside its spots in Seongsu and Hannam. It is also currently holding a pop-up event in Seongsu offering tomatoes. Dubbed HTD, an acronym of Han Sang-cheol Tomato Direct after the farmer’s name, the project sells tomatoes harvested in the morning throughout the day until June 13.

“What you see on your dining table is mostly what is available at Seoul’s wholesale market like Garak Market that gives higher grades or premium to products whose shapes are pretty, which are easy to store and deliver, and that can offer wholesalers a steady supply,” said Groww Market on its Instagram, explaining why it holds a pop-up for just one farmer.

“If farmers themselves become brands, the value of edible products can be decided based on the environment they grow in and flavors they bring out. And regardless of what standard the retailers have set, the farmers will have freedom to plant and grow products in the ways they desire.”

Epigram, a collective shop located in Gyeongnidan-gil, central Seoul’s Yongsan District, collaborated with the city of Okcheon in North Chungcheong until last month to introduce what’s grown there to Seoulites. 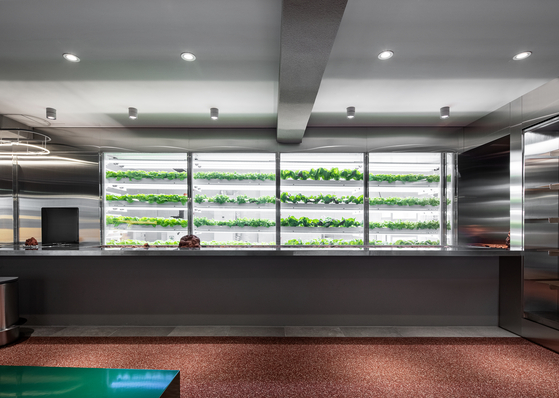 The inside of Sikmulsung Dosan, a cafe and showroom for company nthing, which specializes in vertical farming. [CHOI JUNG-HOON]

While these outlets connect consumers to farmers who still grow things out in the nature, some tech companies are showing how farming is moving indoors with cutting-edge technology. One such company is called nthing, which won the CES 2020 Innovation Award for its Planty Cube, a modular vertical farm that cultivates vegetables in a fully controlled environment.

Just like farmers communicate with consumers, the company also decided to build a channel to explain how it grows fresh and nutritious vegetables. It opened Sikmulsung Dosan, a cafe and showroom where visitors can see a sample module that grows vegetables, buy greens and even eat dessert made with the herbs grown there.

The cafe is located in restaurant-and-cafe packed Apgujeong in southern Seoul’s Gangnam District, and the greenery seen through large windows is not difficult to miss. Besides the greens from the produce, the interior is decorated with mostly stainless steel to create a futuristic ambience. 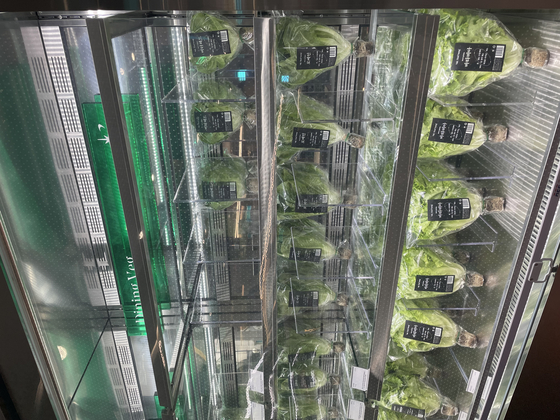 Vetegables grown in such vertical farms are sold at Sikmulsung Dosan. [LEE SUN-MIN]


“We wanted to show that this is what will become part of our future,” said Lee Dong-jin, communications manager of Sikmulsung Dosan which is still in the middle of a soft opening period.

“Although many people won’t delve too deep into all the technical aspects to learn about the technology that makes smart farming possible, we noticed that just having this farm out in front as part of what looks like a cafe naturally inspires them to look for information about the company and vertical farming.”

It plans to offer a variety of salads to eat on the spot, and meal kits to take home soon. For its current signature basil pineapple sorbet and bacon scone with basil spread, it collaborated with chef Kim Ho-yoon of restaurant Ripe.

Farm8, another leading company in the field of vertical farming, is located in a subway station where even larger crowds pass by. It has set up a farm inside Sangdo Station, and anyone can sign up to get a tour around for 9,900 won ($8.90) per person. Visitors can also harvest some of the greens growing inside and take them home.

Looking back on 'a year of extreme extremes' for Wall Street