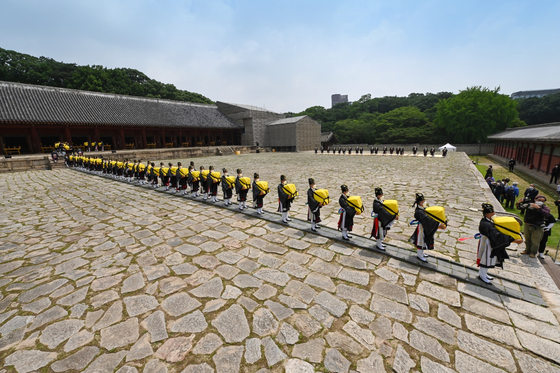 
As Jongmyo, the main shrine for deceased kings and queens of the Joseon dynasty (1392-1910), will go through repairs, members of Jongmyo Jerye Bojonhoe (an organization for the preservation of royal ancestral rites at Jongmyo) move the 49 pieces of sinju that had been enshrined at the central Seoul shrine in a traditional ceremony on Saturday. Sinju refers to small wooden tablets on which the name of a deceased person is written. It is the first time in 151 years that all sinju of Joseon kings and queens have been moved out of Jongmyo. They were enshrined at the neighboring Changdeok Palace and will return to Jongmyo next year after repairs are completed. [CULTURAL HERITAGE ADMINISTRATION]