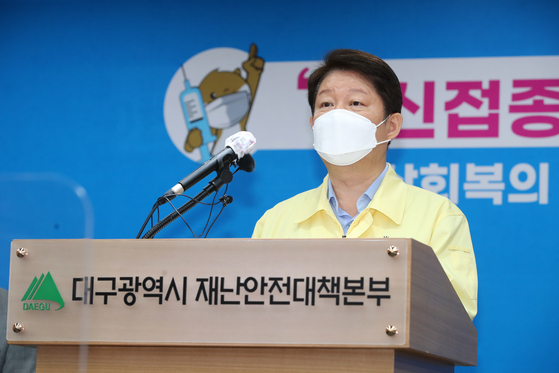 Daegu Mayor Kwon Young-jin speaks during a briefing on May 31. [NEWS1]


Daegu Mayor Kwon Young-jin is under fire after the city's recent proposal to secure Pfizer doses for 30 million people was confirmed to be fake.

Criticism came after the Medi-City Daegu Council, an association of medical institutions in the city, held negotiations with a foreign trading company to import Pfizer doses for 30 million people in three weeks, separate from the doses for 33 million people that the government has agreed with Pfizer.

The council and the trading company were said to have exchanged documents, and the Daegu Metropolitan Government transferred the proposal to the Ministry of Health and Welfare.

“Pfizer only supplies its vaccine to central governments and international health organizations, and hasn’t approved the distribution to Korea to any third-party organization," said Sohn Young-rae, a senior health official of the Central Disaster and Safety Countermeasure Headquarters, during a briefing on June 3.

Health and welfare minister's policy advisor Yeo Jun-seong indicated in hashtags on a related Facebook post that the purported address of the foreign trading company appeared to be in Florida, its phone number in Portugal, and its website not operational.

Pfizer Korea later issued a statement, saying, “The Pfizer headquarters and Pfizer Korea have not authorized any entity to import, sell or distribute the vaccine to Korea, thus it cannot be provided through an intermediary.”

The company added that it will launch an investigation and will take legal action against the unofficial transaction if necessary.

Some Daegu citizens expressed anger and disappointment at Mayor Kwon for the confusion, and a petition was posted on the Blue House website.

A petitioner described as a Daegu citizen wrote, "I am so embarrassed that I cannot live in Daegu anymore," and demanded that the mayor make an official apology. The petition had more than 6,000 signatures as of Sunday.

The Daegu Metropolitan Government released a press release on June 4, expressing regret over the confusion and the backlash.

"The proposal for the introduction of the vaccines was made last December by Medi-City Daegu Council [...] as a way to help the government procure vaccines,” the press release said, stressing that the city merely wrote a letter of purchase intent to the Council in the name of the city’s mayor as per a Health Ministry manual.

“It is regrettable that, regardless of the success or failure of the vaccine purchase, the recent statement of the ruling party saying that [it] was an incident that devalued the country’s national prestige is distorting and disparaging the local medical community’s efforts made in good will,” it added.