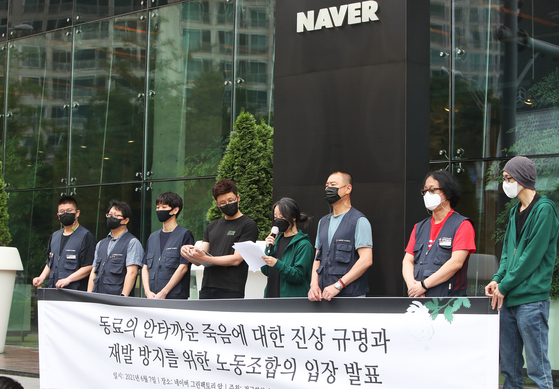 Members of Naver's labor union speak about the result of its preliminary investigation into the suicide of the company's employee on Monday at the headquarters in Seongnam, Gyeonggi. [YONHAP]


Naver's union accused top management of being dismissive of excessive workloads and workplace bullying in a report about a male worker who took his own life last month.

The union released the findings of a preliminary internal investigation report Monday and asked the Labor Ministry to monitor Naver for violating the Labor Standards Act, and its strictures on bullying and harassment in the workplace.

A Naver employee in his 40s committed suicide on May 25.

In its report, the union said the death should be categorized as an occupational accident, connecting the suicidal feelings the employee had with physical and verbal abuse by an executive revealed through his final suicide note, e-mails and records on the corporate instant message service.

The executive served as chief leader of the map development team, and was the direct superior of the deceased.

The report blamed top management for ignoring complaints about the executive earlier this year.

“An employee questioned the promotion of the executive during a meeting with Founder and Global Investment Officer Lee Hae-jin and CEO Han Seong-sook,” the report said.

“[The employee] cited his lack of capabilities including wrongdoings from his previous company, other employees’ difficulties working with him, incompetent leadership of the navigation map business and the reasons for quitting a previous position at Naver. But an executive in charge of human resources management just said that the company carries out an evaluation to verify criteria and went ahead with the initial decision,” it read.

The executive moved from Naver to gaming company Netmarble in 2016. He returned to the portal and instant messaging company in 2019.

The union didn’t specify reasons for why he quit Naver in 2016, adding that its investigation is continuing.

A spokesperson for the company declined to comment on accusations by the union, saying that it has asked an external agency to verify any connection between the death and alleged workplace bullying.

The report also said that employee had a heavy workload and records from instant messenger and e-mails indicate that he worked at night after going home and even during vacation.

“The deceased employee was trapped in a distressful situation because of the executive’s power,” said Oh se-yoon, head of Naver’s union, in a statement.
“He pressured the employee by threatening that he will deprive him of his job, salary and stock options,” Oh said.
Naver CEO Han apologized to employees for the case last week, and said the company is taking the death seriously.

The police launched an investigation last week to look into the cause of the suicide.

If you or someone you know is feeling emotionally distressed or struggling with thoughts of suicide, LifeLine Korea can be contacted at 1588-9191 or the Crisis Counseling Center at 1577-0199. The Seoul Global Center offers English-language counseling, contact 02-2075-4180 (+1) to arrange a session. Other international helplines can be found at www.befrienders.org.