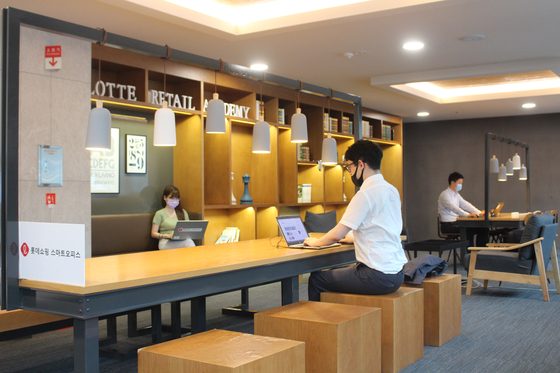 Lotte Shopping's "base office" installed in Lotte Department Store's Yeongdeungpo branch in western Seoul. Staffers can choose among five locations in Seoul and Gyeonggi to work that day. [LOTTE SHOPPING]

Despite the world-famous internet speeds and leadership in chips and electronics, Korean companies have never been very enthusiastic about modernizing the workplace.

According to an April report by Samil PwC, Korea’s adoption rate of “smart work” practices — such as holding online meetings or allowing employees to work from home, or telecommute — is just 25 percent, while in other advanced economies in the United States and Europe the figure surpasses 50 percent.

But the coronavirus pandemic has changed things, creating an unprecedented push to adopt digitized workplaces and reduce contact between coworkers.

“Before, companies regarded smart work as a trend or choice. A lot of clients that came to me were people that had already accepted the concept,” said Agnes Choi, CEO of the smart work R&D company Beta Lab.

“After the Covid-19 outbreak, I was contacted by companies that know nothing about smart work and mid-sized companies that are relatively more conservative. The questions I get today are no longer ‘Do we really need this?’— it’s ‘How do we do it?’”

It’s clear that the pandemic has changed the way Koreans work this year, but the big question is: Will it last?

Flexible in their own way

Since the first Covid-19 spike in mid-February, companies have responded in different ways.

Some, mostly IT and game companies, went as far as sending all employees home. Other firms split employees into groups and had them take turns coming into the office and working from home, or commute at different times to reduce exposure.

Among older companies, one notable experiment is the establishment of “base offices,” which, like base camps, are small, remote offices where groups of staff can gather without being exposed to the entire company.

SK Telecom launched four “smart offices” — its take on base offices — in central Seoul and Bundang, Gyeonggi, in April. The plan is to open five more in the near future. These offices are powered with 5G and the cloud network allows employees to work as if they are sitting at their normal office computer.

In a June town hall meeting, SK Telecom CEO & President Park Jung-ho said the ultimate goal is to ensure everybody works within a “10 to 20-minute distance” of their own home.

Lotte Shopping, one of Korea’s largest retail companies, embarked on a similar experiment in July, opening five smart offices at its brick-and-mortar operations in the Seoul metropolitan area.

Yang Jin-ho, chief operating officer of Toss Lab, which runs the enterprise collaboration platform Jandi, said business owners are likely to shift their focus away from physically expanding offices if employees feel productivity isn’t enhanced by being in the same physical space.

“As employees, our users are starting to realize that productivity can be maintained or improved working at home," Yang said during a conference in June. "Then employers go to the office, only to find it empty. Then they ask themselves 'do we really need all this space?'”

At FASTFIVE, a shared office operator with 25 branches, inquiries and the number of registered clients have constantly risen this year even as the coronavirus progressed. Between January and June, the number of FASTFIVE members jumped 33 percent to 17,000.

“Our analysis is that there's an urge for larger companies to split the office physically into smaller teams,” said the company. “There was a lot of contact from firms that wished to open base offices across our branches."

Telecommuting isn't entirely new to Korea, but the practice was mainly seen at IT companies or younger start-ups that are comfortable with online communication and remote working tools.

Executive Vice President Kim Jee-hyun of SK mySUNI, an educational content provider for SK Group staffers, says the fundamental reason that Korean companies were slow to change the way they work was attitude, not technology.

“The general mindset of senior managers above their 40s was that face-to-face communication — giving orders or receiving oral reports — makes things work. There was an ungrounded sentiment of resistance toward virtual communication that kept companies from trying,” said Kim.

“Although unexpected, Covid-19 forced companies to telecommute, offering an opportunity to clear the vague dislike and experience the convenience that comes with it.” 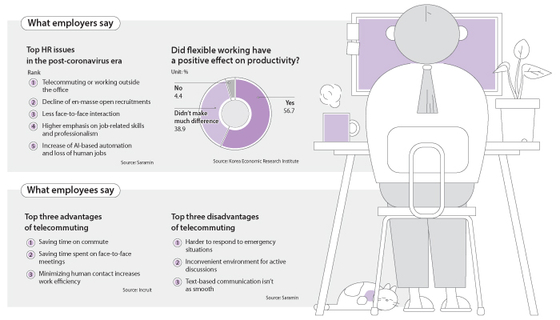 In a July report based on survey results, the Korea Economic Research Institute said 75 percent of conglomerate affiliates in Korea adopted flexible working hours to cope with the Covid-19 pandemic.

Among companies experimenting with this new work pattern, 51.1 percent said they plan to continue or expand the practice even after the immediate coronavirus threat is resolved. Fifty-seven percent had found that flexible working hours improve productivity.

As for employees that got to stay home, more seemed to welcome the decision than complain. Multiple survey reports asking for employees’ reaction to telecommuting showed that roughly 60 to 70 percent of respondents say they were satisfied with the change.

A common benefit that topped the list across all surveys was saving time spent traveling to the office. Another popular answer was the reduction of needless meetings and verbal reports. Some respondents said working alone on a digital platform increased their productivity.

“Team leaders in our division were often called off to meetings with senior executives, so junior staff often had to wait for approval on day-to-day matters until they were dismissed. Now that everybody’s working from home, I feel feedback comes back at a much faster pace,” said a 28-year-old employee working at a telecommunications firm.

But remote work doesn't work for everybody. While companies working in telecommunications or IT might find the switch-over relatively painless, the transition is a lot harder for more physical sectors, like manufacturing.

In fact, some of the largest companies in Korea like Samsung, LG Electronics and SK hynix have been unable to allow any of their staff to work from home.

“For manufacturing companies, the entire organization rotates around the factory and so do decisions in human resources (HR). Even people sitting at desks — a lot of them work closely with staff at the production site. As long as the factory is running, so is everybody else,” said an electronics industry source.

Allowing telecommuting for small groups of employees would be unfair, said another source, not to mention that the security stakes are high for firms where technology is key.

Before cases spiked in the capital area over the last two weeks, a lot of companies had already normalized their working patterns and returned to the office — a sign that they’re unlikely to keep flexible working in place once the pandemic is over.

Seo Hyung-do, the leader of the Korean Standards Association’s workplace innovation consulting team, says companies have three major concerns — the lack of culture, difficulty in using IT tools and lack of a social security net that would back establishment of telecommuting practices in the long term.

“The utmost task is resolving the issue of the negative perception surrounding remote work, which at the moment greatly falls short compared to [social] demand. Employers fear lowering productivity and complex HR management; while employees worry about unstable employment or negative feedback from managers,” Seo said.

“In the long term, there should be legal and regulatory reform on establishing stable grounds for various forms of work patterns: At the moment it lacks a legal interpretation.”

In terms of productivity, HR experts say it's important for teams to set a clear goal and evaluate performance on progress, instead of simply measuring the quantity of work done.

“The key is in performance management. Employees should have a clear vision on the end result when sharing goals and assigning work. Even if they’re working from home, updates and feedback should be constantly exchanged,” said Choi Chul-kyu, CEO of Human Solution Group, an HR consulting firm.

Choi points out that the moment production starts falling in a group of telecommuters is when they start losing trust. Doubting that everybody is working as hard as each other can cause teams to focus less on doing things properly and more on competing to do the least amount of work.

“This is why building a system of trust is so key — a platform where everybody can see what each other is doing and evaluate their own contribution to the team,” he says.

“Even the smallest rules can help avoid misunderstandings, like setting up a short signal message for immediate call requests or not using capital letters to avoid looking like you're shouting on messenger apps.”

On the contrary, Beta Lab CEO Agnes Choi says the less rules and restrictions on the communication channel, the better it will encourage conversations that help spur creative ideas.

“An online community of balanced power can be very helpful. If the channel has so many rules that nobody can talk freely or lay the groundwork for creative ideas, it’s better not to spend time and money on making it in the first place,” she said.

“The worst case scenario is a platform dominated by a few senior figures. This makes it nothing more than a bulletin board. One way of preventing this is giving management rights of the platform to younger employees.” 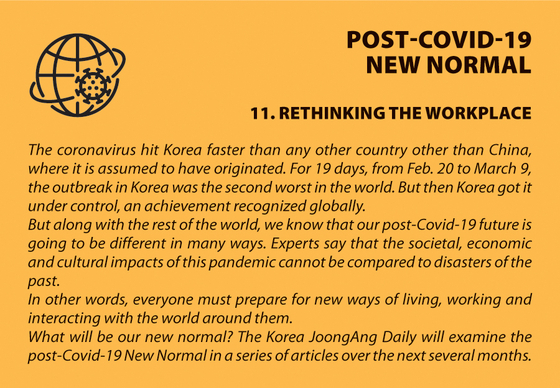