Master artisans connect past, present and future at Tong-in Gallery

Master artisans connect past, present and future at Tong-in Gallery 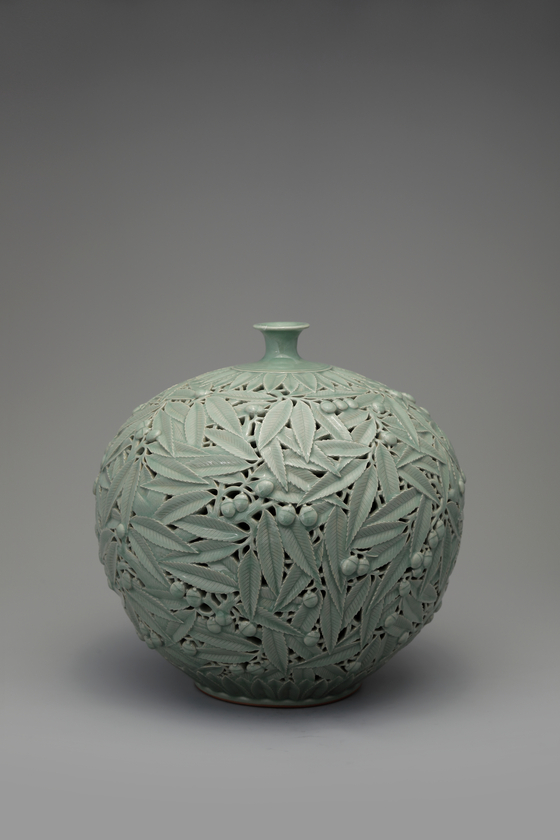 
The Tong-in Gallery in Insa-dong, central Seoul started as a shop in 1924, selling antiques to foreign buyers. Now the shop is run by the founder’s son, and his wife Lee Gye-sun is the director of Tong-in Gallery which opened in 1975. The gallery has brought numerous promising craft artists to light, and opened a New York City branch in 2002.

Currently, the gallery is hosting the “Masters and Future Masters” exhibition which runs until June 13 and presents selected works by Korean Ceramic Master Hands and Icheon Ceramic Craft Masters, as well as up-and-coming artists.

Korean Ceramic Master Hand is the highest honorary title for a ceramic artisan in Korea. Icheon, Gyeonggi is a historic city known for supplying ceramics to the royal family during the Joseon Dynasty (1392-1910). The city has been designated as a Unesco Creative City of crafts and folk art, and still carries on the heritage of Korean ceramics.

“An exhibition that puts together the past, present and future was my long-cherished wish,” said Lee. “Master artisans are the living history of an era. So I wanted to show the best works by our forefathers, contemporary artisans and four young artists who embody the future of Korean ceramics.” 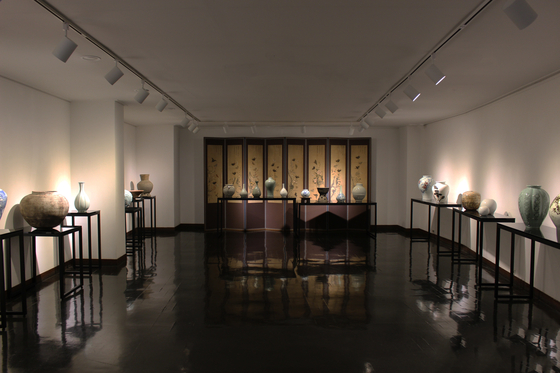 A view of the “Masters and Future Masters” exhibition at the Tong-in Gallery in Insa-dong, central Seoul [TONG-IN GALLERY]


Kim proudly introduced his “Celadon with a Double Openwork Acorn Design” (2005), a celadon jar with acorn and oak leaf patterns carved using elaborate openwork. Openwork, or tugak in Korean, is a technique where holes are made to create the design. The jar’s jade green hue is reminiscent of Goryeo Dynasty (918-1392) celadon.

“With just one small slip of the carving tool, I had to throw away the whole jar,” said Kim. “I went through so much trial and error, and the carving process took me three full months. Openwork is the most unpopular pottery genre because it is the most time-consuming and easy-to-fail at. They say you have to be a fool to make an openwork piece.” 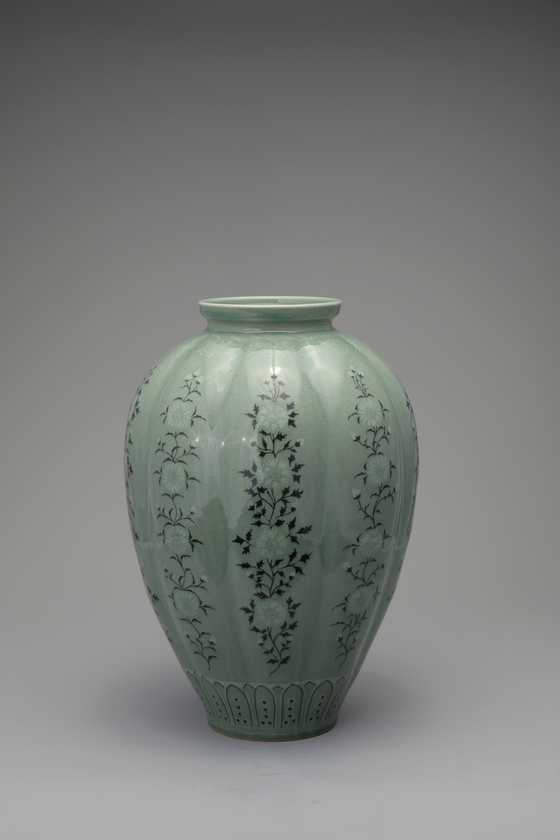 
While Kim and Choi’s works may look like classical Goryeo era celadon to a layman's eyes, the artisans say they strived to add modern twists to their creations.

“We first start learning pottery by imitating works from the 13th century,” said Kim. “That’s good for learning, but we’re in the 21st century. In the end, we should be making 21st-century works because crafts should reflect the era.”

“So for 'Celadon with a Double Openwork Acorn Design,' I wanted to base it on Goryeo era celadon but give it a 21st-century twist. I pondered what pattern reflects the 21st century, and chose one from nature that was not used in the Goryeo Dynasty; hence the acorn pattern.”

Park has a unique artistic background; he majored in Western-style painting but switched to ceramic art when he realized he had more talent for the latter. Now he applies Western painting techniques on ceramics.

“My works are bound to give off a modern vibe because of my background,” said Park. “The transition from two-dimensional painting to three-dimensional ceramics was harder than it sounds.” 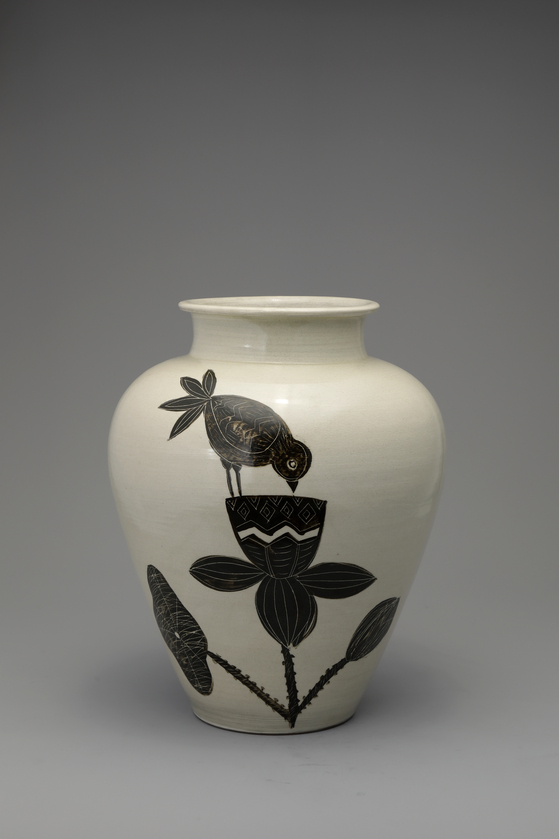 
Park uses designs inspired by the nature he saw in his childhood: birds, vines and mountains.

“I know they say imitation is the mother of creation. But when I started ceramic art, I was already 27 and set in my ways of Western painting. So instead of copying traditional patterns, I illustrated my own designs onto my ceramics. I think they’re more relatable for modern people.

“Still, I refer to birds and flowers in minhwa (Korean folk paintings) for my illustration designs. Just like how modified hanbok (traditional Korean attire) is gaining popularity, I think old and new can always merge.” 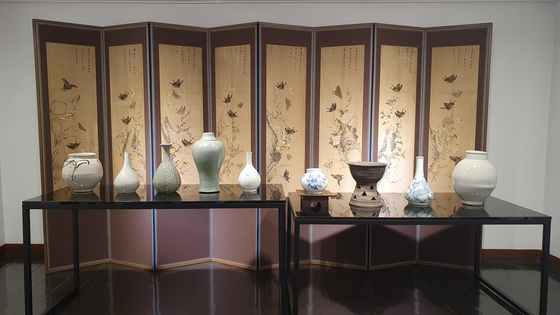 The exhibition features many more works by other contemporary master artisans and promising young artists, truly connecting the past, present and future. 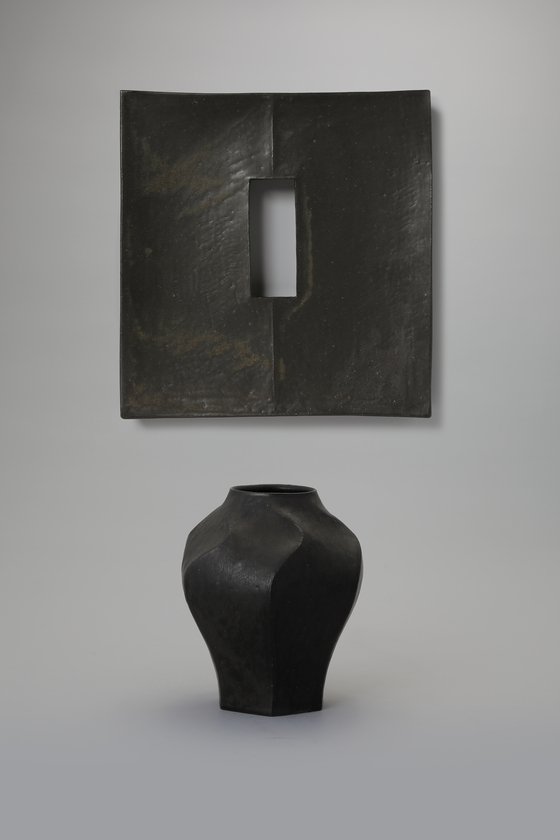 
While sitting down for a discussion, Lee and the artisans unanimously lamented the lack of domestic appreciation for Korean ceramics.

“It’s like how we don’t appreciate air because it’s always around us,” said Kim. “To Koreans, Goryeo era celadon is too familiar to be valuable because we see it all the time. But the jade green color and techniques seen in Korean celadon cannot be found anywhere else in the world. My works were on display in Italy in 2017, and European visitors were shocked by my double openwork pieces, asking me if they were really handmade.” 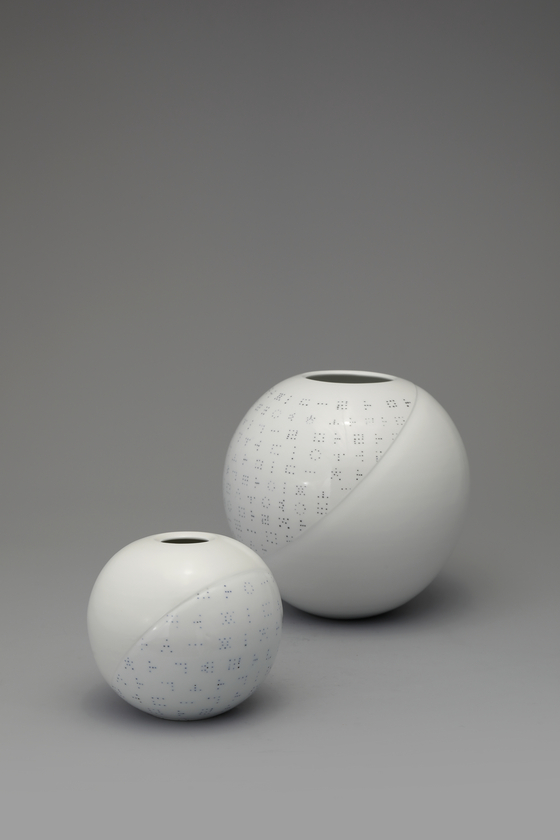 “Ceramics are essentially meant to be used,” Lee said. “All craft items are. Our ancestors used to store soy sauce and grain in moon jars!”

“Cheap ceramics are available all over the internet nowadays, and people don’t care if they were mass-produced in China or handmade by an artisan in Korea,” said Park. “I hope people start investing in high-quality ceramic cups of their own. They’ll be slightly more expensive than cheap mugs or plastic cups, but they will also be more durable and special.

“Next time you need a gift for someone, why not pick up a high-quality ceramic piece that an artisan made with their heart and soul?”

'All About Attitude' is all about Korean crafts