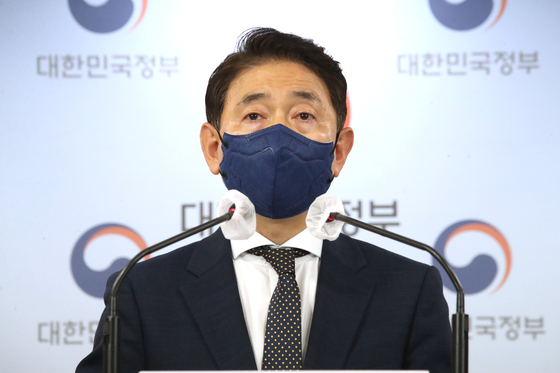 
The Anti-Corruption and Civil Rights Commission announced Monday that it discovered 16 cases of suspicious land transactions involving 12 lawmakers from the ruling Democratic Party (DP) and their spouses or immediate family.

Kim Tae-eung, head of the commission’s office investigating DP lawmakers' real estate affairs, emphasized at an afternoon press briefing in the Government Seoul Complex that an individual’s inclusion in the list “carries no political considerations” and that they were added “if there was even the slightest possibility that the law might have been in broken” in the cases.

Of the 16 cases the commission deemed suspicious enough to warrant further attention, six were suspected cases of borrowing a family member’s identity to purchase real estate, and three were cases where inside information may have been used. Another six were suspected violations of the Farmland Act, while one was a possible breach of the Building Act.

According to the commission, their probe focused on real estate transactions around New Town developments, taking into account media reports of suspicious land purchases by lawmakers and tip-offs from the public.

The commission was asked by the DP to probe all 174 of its sitting legislators and their spouses and immediate family members in March. The request came as public suspicion was mounting that DP lawmakers had engaged in illegal land purchases using access to inside information about development plans.

A total of 817 individuals were probed in the course of the commission’s work.

However, the commission declined to divulge the names of those under suspicion. “Our probe is not an investigation, but rather an administrative survey. As such, we cannot give out specific names.”

The commission’s probe is just one of several conducted by various government agencies in response to a scandal which erupted on March 2 when two civic groups — the People's Solidarity for Participatory Democracy and Lawyers for a Democratic Society — accused Korea Land and Housing Corp. (LH) employees of purchasing land in Gwangmyeong-Siheung, Gyeonggi, ahead of an announcement by the Land Ministry that the site would be developed into the latest New Town.

Although the accusations initially singled out employees at LH for taking advantage of inside information available at the state-run company, the scandal soon engulfed more public companies, including regional development corporations, and civil servants at all levels of government.

An interagency task force under the office of the prime minister has been working with the National Tax Service and the Financial Services Commission since early March to examine allegations of illegal property sales and acquisition by officials at publicly-owned LH and related parties.

After its announcement, the anti-corruption commission passed on the list of suspected DP lawmakers to the interagency task force on Monday, which has said that it will undertake a “stern investigation” of those named.

The commission also passed the list to the DP the same day. DP spokesperson Koh Yong-jin said, “The party’s leadership will read the materials today and discuss what measures to take tomorrow.”

In response to the commission’s decision to not divulge the names of the DP lawmakers under suspicion, opposition People Power Party spokesperson Ahn Byoung-gil said that the list of names must be made public.

“To not reveal the names of lawmakers suspected of conducting illegal real estate transactions after more than two months is yet another act of deception against the public,” Ahn said.