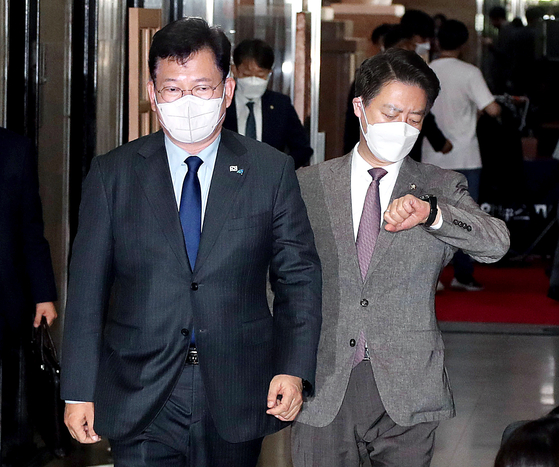 
The ruling Democratic Party (DP) told 12 lawmakers identified by the Anti-Corruption and Civil Rights Commission as being involved in illegal real estate transactions to leave the party.

The announcement, made by the DP’s spokesperson Koh Yong-jin at the National Assembly Tuesday afternoon, follows the decision of DP chairman Song Young-gil to reveal the lawmakers' names. They were announced Tuesday afternoon.

After the commission announced Monday that it discovered 16 cases of suspicious land transactions involving 12 lawmakers from the ruling DP and their spouses or immediate family, the opposition People Power Party (PPP)  called for the commission and the DP to divulge their names.

The commission said it was unable to release the names as its probe was not an investigation but rather an administrative survey. The DP’s leadership decided at a closed party leadership conference Tuesday morning to release the names to assuage mounting public anger over high-ranking officials and state-run company employees using access to development plans to buy land and buildings beforehand.

“The reality is that people’s anger over illegal land purchases appears too huge, and that public opinion sees politicians as hypocrites in this matter,” said Koh during Tuesday’s announcement. “It is therefore impossible not to take pre-emptive measures, especially where illegal real estate transactions are concerned.”

In its probe, the commission discovered several types of suspicious activities, including the borrowing of a family member’s identity to purchase real estate, use of inside information and violations of the Farmland Act and the Building Act.

The party asked all 12 to voluntarily leave the party.

However, with some of those identified by the commission protesting their innocence, the DP has said that it is asking individuals to put the party first and return later if their names are cleared.

“Although asking them to leave the party is an excessive pre-emptive measure considering presumption of innocence, we hope that they as unaffiliated lawmakers will be cleared of suspicions through a fair investigation,” Koh said. 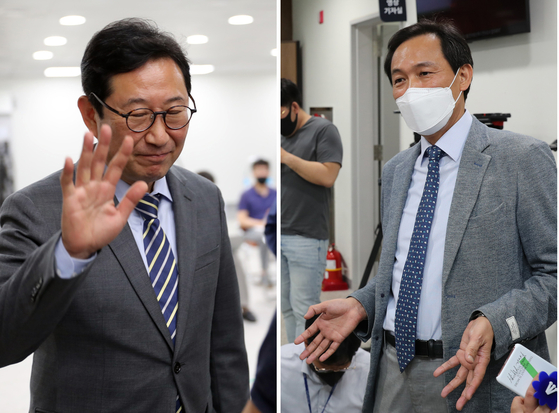 Kim Han-jung (left) and Woo Sang-ho speak separately to the media after the Democratic Party announced it had asked the two lawmakers to leave the party and face investigation for suspicions that they engaged in illegal real estate activities. 10 other ruling party lawmakers face the same request. [YONHAP]

Three of the lawmakers – Woo Sang-ho, Kim Han-jung, and Kim Hoi-jae – have claimed innocence and protested the party’s call for them to quit.

“The commission never even asked me for any materials,” said Kim Han-jung. "I would like to know with what evidence the commission has forwarded my name to the party."

Kim Hoi-jae called for the commission to apologize for its “wrong” investigation, and claimed a “misunderstanding of facts.”

The ruling party is nervous about being connected with illegal real estate transactions made using access to inside information.

The commission’s probe was just one of several conducted by various government agencies in response to a scandal that erupted on March 2 when two civic groups — the People's Solidarity for Participatory Democracy and Lawyers for a Democratic Society — accused Korea Land and Housing Corp. (LH) employees of purchasing land in Gwangmyeong-Siheung, Gyeonggi, ahead of an announcement by the Land Ministry that the site would be redeveloped.

Although the accusations initially singled out employees at LH for taking advantage of inside information, the scandal soon engulfed more public companies, including regional development corporations, and civil servants at all levels of government.