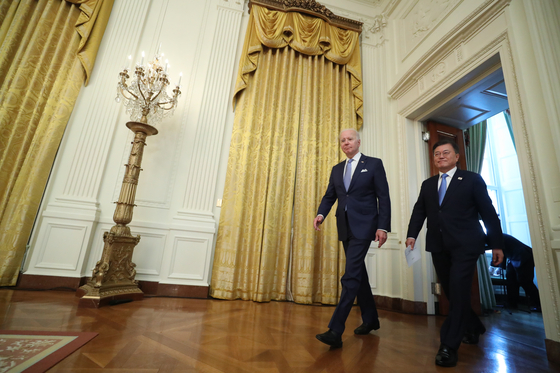 
Most people with smartphones can guess what 6G will be. But what are open interfaces in radio access network, otherwise known as Open RAN? Or quantum technology?

All three are advanced telecommunications technologies. And according to the presidents of South Korea and the United States, these are key areas for cooperation between their countries -- to keep China from stealing a march on either.

At their summit in Washington on May 21, Moon Jae-in and Joe Biden pledged to work together on next-generation network and computing architecture.

“The technologies cited in the joint statement were very specific and considered the main areas that the United States and China are competing against each other for dominance,” said Yeon Won-ho, a research fellow at the Korea Institute for International Economic Policy.

China seems to have been paying attention. On Monday, it described its own vision of networks of the future, saying it will commercialize 6G technology by 2030.

6G is, of course, the sixth-generation of wireless communications technology under development by many companies. It will succeed the 5G networks that started operating in advanced countries in 2019.

Open Radio Access Network (RAN) is a concept that allows telecom operators to mix and match components of a network system from multiple vendors by using open and interoperable interfaces.

Standard practice for the telecommunication industry is for network equipment suppliers to offer proprietary software and hardware, which means a customer is stuck using equipment and a software system from a single vendor.

China’s Huawei is the largest supplier of network equipment in the world, with 31 percent market share last year, according to market tracker Dell’Oro Group. Nokia and Ericsson tie for the No. 2 position with 15 percent each.

“[The push for Open-RAN] is intended to change a market dominated by network equipment companies into one led by both the gear vendors and software developers,” said Lee Moon-sik, a director at the Electronics and Telecommunications Research Institute.

Obviously, this would give a very big, new role to software developers like Qualcomm.

The Center for Strategic and International Studies (CSIS), a Washington-based think tank, points out that the U.S. has reasons to like this approach.

“Open RAN could benefit the United States economically and strategically by creating a more diverse and innovative ecosystem for wireless networks,” stated a report by CSIS entitled “Global Networks 2030,” which was released in March.

It went on to say that the Open-Ran approach “would disrupt the current commercial landscape, which is dominated by a handful of suppliers, the largest of which [is] Huawei.”

Still, the concept is at an early stage with Finland–based Nokia, a former telecom giant, leading the way.

In the private sector, Korea and the U.S. are already forging an alliance for developing 6G.

Another area of focus for bilateral cooperation is quantum technology and its uses in computing and engineering. Simply put, the idea of quantum computing is to find a way to pass the barriers that limit the speed of data transfer by tackling the issue on a subatomic level. The resultant computer would theoretically be millions of times faster and more powerful than the best technology around today.

The Science Ministry announced last week that Korea and the U.S. will have regular seminars and exchange programs for their quantum computing experts.

The U.S. government committed $1.2 billion through 2023 to fund the development of quantum technology through the Quantum Initiative Act that went into effect in 2018.

China also considers quantum technology a priority and has established a state-run laboratory dedicated to it. It is backed by $10 billion in funding by the government.

In 2020, China launched a satellite that communicates via quantum cryptography.

“China holds a strong grip in quantum cryptography which could make it capable of cracking the security methods widely used today,” said Kim Jae-wan, an advanced computation professor at Korea Institute for Advanced Study.
“For the U.S., it is critical to ensure technical supremacy in this field because there is growing concern over security,” Kim said, “And the U.S. might not want to repeat the experience of losing the race for 5G deployment.”