Tech fair focuses on future and where Korea is going

Tech fair focuses on future and where Korea is going 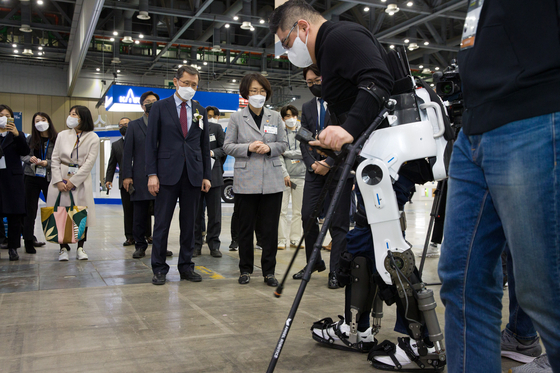 Lim Hye-sook, minister of science and ICT, watches a man who has been paralyzed for 26 years stand upright and walk with the help of robotic limbs that were presented at the 2021 Korea Science & Technology Fair held at Kintex in Goyang, Gyeonggi, on Wednesday. [MINISTRY OF SCIENCE AND ICT]


A man who has been paralyzed for 26 years stands upright then walks fast and powerfully around the Kintex hall with the help of robotic limbs that were presented at a tech fair held on Wednesday.

"The cost of research and production is still too high for us to make this for everyone, but we believe this is the start to changing people's lives."

The annual event was held at Kintex in Goyang, Gyeonggi, after holding it online last year due to Covid-19. Major events at the fair are also viewable online, such as exhibitions and seminars, since the offline event only allows a limited number of visitors to abide by the social distancing guidelines. 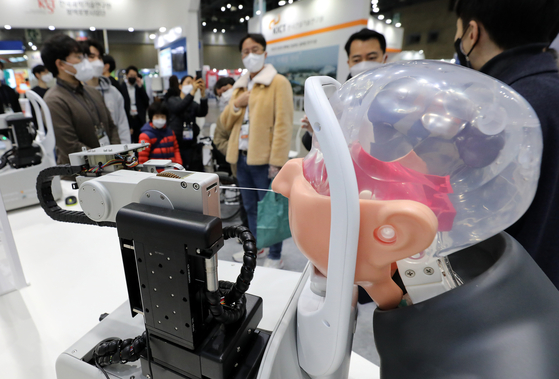 The 2021 Korea Science & Technology Fair held at Kintex in Goyang, Gyeonggi, features 130 participants ranging from tech companies and university research teams under the slogan ″Window to the future, journey to science technology.″ [MINISTRY OF SCIENCE AND ICT]


Hosted by the science ministry and co-organized by the Korea Foundation for the Advancement of Science & Creativity and the National Research Foundation of Korea, the fair features 130 participants ranging from tech companies and university research teams under the slogan "Window to the future, journey to science technology."

This year's fair looks into the future of Korea's technologies rather than celebrating the status quo, Lim Hye-sook, minister of science and ICT, told the Korea JoongAng Daily.

"This morning, the ministry chose 10 core subjects that we think we should be concentrating our power on," Lim said. "The fair will be a chance for us to show the Korean people what we have achieved so far and what we can do in the future."

The ministry said that it will enhance the technical level of the aforementioned fields to 90 percent of the level attained by global leaders by 2030.

"We especially want to highlight our quantum technology today," Lim said. "It is true that Korea is behind other leading countries in the world, but it is a subject that all countries are showing a keen interest in, and we are going to give our full support to bring it up to their level." 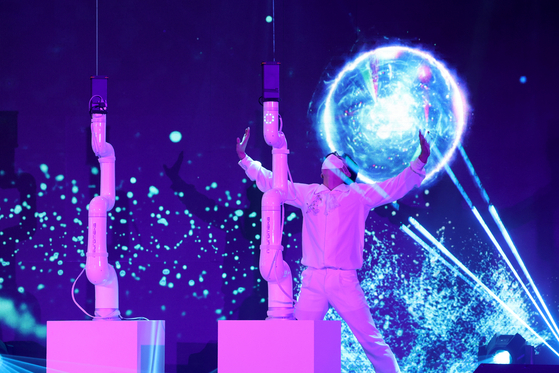 An opening ceremony for the 2021 Korea Science & Technology Fair is held at Kintex in Goyang, Gyeonggi, on Wednesday. [MINISTRY OF SCIENCE AND ICT]


The latest quantum computing technology introduced at the fair was developed by the Korea Institute of Science and Technology (KIST). The institute presented a quantum computer, which normally only functions at extremely low temperatures, that can fully function at room temperature. This is the second in the world.

"We have also made a user-friendly interface that even ordinary people without scientific knowledge can use," an official from KIST said. "Foreign countries are taking the lead in the quantum computing field but Korean technology will follow soon."

Minister Lim also emphasized that she was able to achieve understanding on quantum technology during her recent visit to the United States. She met with the heads of U.S. tech departments to detail what partnerships could be made in the future, she said.

"Technology is no longer just meaningful in itself, but is directly related to our country's power and competitiveness on a global scale," Lim said. "Our focus on the 10 new subjects shows how we plan to take the lead. We promise to develop them so that we may do so."