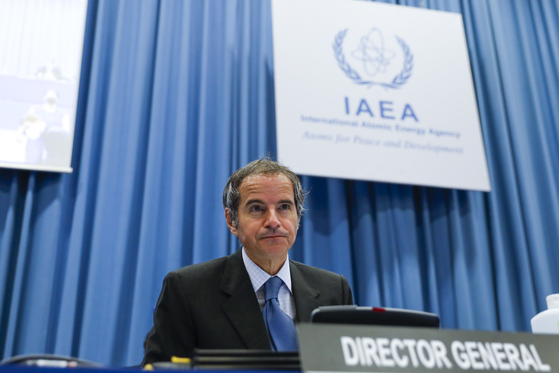 
The head of the International Atomic Energy Agency (IAEA) said there are continued signs of activity at a suspected uranium enrichment facility in North Korea as the UN nuclear watchdog is “intensifying” its readiness to play a role in any new denuclearization negotiations.

Rafael Grossi, director general of the Vienna-based IAEA, said in a quarterly update to the agency’s Board of Governors released Monday, "There are ongoing indications of activity at the Kangson location,” referring to a facility in Chollima District of Nampo City in Kangson, seen by the intelligence community as a covert uranium enrichment plant.

Grossi said that a steam plant has continued to operate since his previous statement to the board in March, adding that "the duration of this operation is consistent with the time required for a reprocessing campaign at the radiochemical laboratory.”

He was unable to confirm if reprocessing of spent fuel is taking place, which can be enriched for use in nuclear weapons.

Some experts believe that the Kangson facility produces highly enriched uranium-235, which is suitable for use in nuclear weapons.

Olli Heinonen, a former deputy director-general for safeguards at the IAEA, in a report last December on the 38 North website said the characteristics of the site are more consistent with a plant that could manufacture components for centrifuges.

Grossi told the 35-member board Monday that since his report last September, "some nuclear facilities in the DPRK have continued to operate while others have remained shut down,” referring to the acronym for the North's official name, the Democratic People's Republic of Korea.

The IAEA believes North Korea shut down its main reactor at the Yongbyon nuclear complex in North Pyongan Province, thought to have produced plutonium, in December 2018.

Grossi noted that there are “no indications of operation” at the 5-megawatt nuclear reactor at Yongbyon, nor any production of enriched uranium at the reported centrifuge enrichment facility on that site.

“The DPRK’s nuclear activities remain a cause for serious concern,” said his report, which noted that continuation of North Korea’s weapons program is “a clear violation of relevant UN Security Council resolutions and is deeply regrettable.”

He added that IAEA “is intensifying its readiness to play its essential role in verifying” the North’s nuclear program.

North Korea expelled IAEA inspectors from the country in 2009. Its sixth and last nuclear test was in September 2017, followed by a self-imposed moratorium on nuclear and long-range missile testing since 2018.

Grossi called on North Korea “to comply fully with its obligations” under UN Security Council resolutions and to cooperate with the IAEA “in the full and effective implementation” of the Non-Proliferation Treaty (NPT) Safeguards Agreement and to resolve issues that have arisen during the absence of IAEA inspectors from the country.