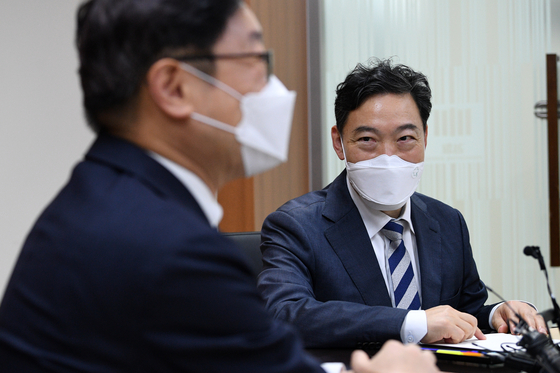 
The prosecution on Tuesday formally opposed the Moon Jae-in administration’s plan to require district prosecutors to obtain approvals from the prosecutor general and the justice minister to launch investigations into major criminal cases.

“The prosecution cannot accept the proposed plan to require the minister of justice’s sanction [to launch a probe] because it is a serious violation of the prosecution’s political neutrality and independence,” the Supreme Prosecutors’ Office said in a statement. “Most prosecutors at district offices are also expressing their concerns about it.”

The Ministry of Justice drafted the plan on May 20, designed to largely restrain the prosecutors’ autonomy in criminal investigations. The plan, which will be enforced as a presidential decree, is scheduled for later this month.

Prosecutor General Kim Oh-soo hosted a meeting with department heads of the Supreme Prosecutors’ Office Monday evening and discussed the prosecution’s stance on the proposal. At the meeting, the senior prosecutors reaffirmed that they disagree with the plan.

Following a series of changes, the prosecution is currently left with powers to investigate only six particular types of major crimes. These six types of felonies are corruption such as bribery and political funding law violations; economic crimes such as fraud; violation of laws governing public servants; election law violations; crimes concerning procurement projects and large-scale accidents involving high casualty.

The latest restructuring plan is designed to further restrict the remaining investigative powers of the prosecution.

According to the plan, the investigative departments at the Seoul Central District Prosecutors’ Office are allowed to conduct probes in their particular areas of assignments.

Other district prosecutors’ offices are required to obtain the prosecutor general’s approval before launching an investigation.

For a district office that does not have an anti-corruption department to launch a probe, the prosecutor general must obtain permission from the minister of justice to form a temporary investigation team.

As there was no sign that Park would step back, the Supreme Prosecutors’ Office made its concerns public by issuing the statement Tuesday.

According to the statement, the prosecution said restricting criminal investigations at district offices through a presidential decree is against the higher laws governing the prosecution, such as the Prosecutors’ Office Act and Criminal Procedure Act.

“The prosecution’s powers to have direct investigations were already reduced to six particular types of crimes through previous measures to redistribute investigative powers,” the statement said. “It is more important to stabilize the changed system for the time being.”

The country’s district prosecutions had operated special investigation units, equivalent to anti-corruption departments, until the Moon administration shut them down last year. In October, then-Justice Minister Cho Kuk shut down special investigation units around the country and left only three anti-corruption departments in Seoul, Daegu and Gwangju district prosecutors’ offices.

It remains to be seen whether Minister Park will revise or withdraw the plan to accommodate the prosecutors’ opposition. At the weekly cabinet meeting, Park did not submit the plan for discussion.

“There seemed to be a difference in opinions about the legal principles,” Park said after the cabinet meeting. “[The prosecution’s opposition] was fairly strong.”

Park said he won’t immediately respond to the prosecution’s statement, but he understands the prosecutors' concerns that requiring the justice minister’s approval to launch a probe will seriously undermine their political neutrality and independence.