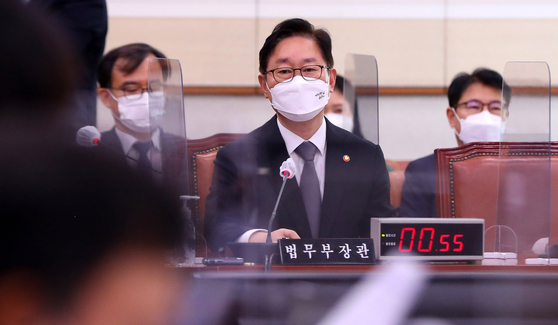 Justice Minister Park Beom-kye answers a lawmaker's question in a Legislation and Judiciary Committee meeting Friday at the National Assembly. Earlier in the day, Park ordered a reshuffle of mid-level prosecution leaders. [NEWS1]

The Ministry of Justice announced Friday that it reshuffled 662 prosecutors, including 652 mid-level prosecutors. The reassignments are effective July 2.

The reshuffle, which affected over 90 percent of mid-level prosecutors, was the largest ever in scale. Heads of investigations of high-profile cases were mostly replaced, while prosecutors who assisted Minister Park and his predecessor Choo Mi-ae were promoted to key posts.

Byeon has been investigating suspicions that the Blue House leaked information to the media about former Vice Justice Minister Kim Hak-eui’s alleged receiving of sexual bribes in order to divert public attentions from the so-called Burning Sun scandal in 2019. At the time, Korean K-pop stars and celebrities were accused of committing sex and drug crimes, while the police covered them up.

Lee Jeong-seob, head of Criminal Department III of the Suwon District Prosecutors’ Office, was ordered to work for the Daegu District Prosecutors’ Office. Lee’s team was investigating allegations that key members of the administration were behind an illegal travel ban imposed on former Vice Minister Kim and a subsequent attempt to pressure prosecutors to not probe the travel ban.

Lim Il-su of the Jeonju District Prosecutors’ Office, who detained and investigated Rep. Lee Sang-jik, former Democratic Party lawmaker and the founder of budget carrier Eastar Jet, was assigned to the Seoul Northern District Prosecutors’ Office. The businessman-turned-lawmaker was investigated on charges of embezzlement, breach of trust and political funding violations.

All four prosecutors overseeing high-profile investigations were replaced before their guaranteed tenure of one year.

Their reassignments will likely hinder the probes as well as any subsequent indictments.

As of now, the investigation team on the nuclear reactor case has told the Supreme Prosecutors’ Office that former Energy Minister Paik Un-gyu and former presidential secretary for energy policy Chae Hee-bong should be indicted on charges of abusing their power of office to arrange the premature closing of the reactor.

The  team on the Kim Hak-eui’s travel ban case also told the prosecution leadership that Lee Kwang-cheol, incumbent presidential secretary for civil affairs, should be indicted on charges of abusing power.

Prosecutors who have been leading investigations into alleged frauds and bribes of former Prosecutor General Yoon Seok-youl were also replaced.

Protecting the powers that be