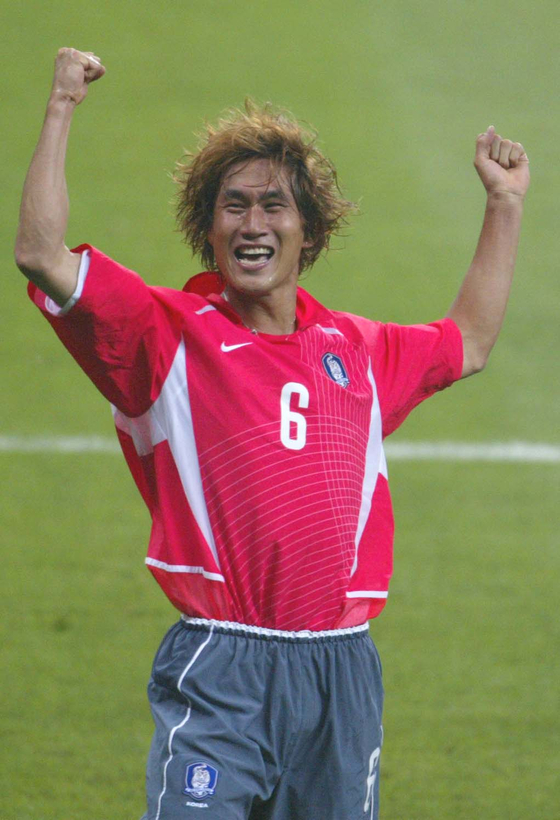 The late Yoo Sang-chul celebrates after scoring a goal that led to Korea’s first ever win in a World Cup match during the game against Poland on June 4, 2002. [JOONGANG ILBO]

Yoo is one of the best multiplayers that Korea has ever seen.

Combining incisive distribution skills with spark attacks and ball control that gave him the ability to play all positions, Yoo led the Korean national team to reach the semi-finals in the 2002 FIFA World Cup.

Yoo’s most famous goal concreted Korea’s first ever win in a World Cup match made during the game against Poland on June 4, 2002.

As an example of his all-around abilities, in 2002, Yoo was named K League 1 Best XI as a forward while also being voted to the All-Star Team of the 2002 World Cup as a midfielder, alongside Hong Myung-bo.

Yoo is one of the only two players in K League history to be named the season-ending Best XI team as a forward, a midfielder and a defender, alongside Kim Joo-sung. 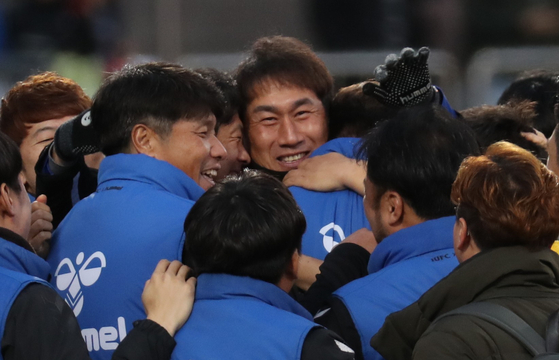 
After a 12-year club career in Korea and Japan, he retired in 2005. Shortly after his retirement he shocked his fans, revealing that he had actually been blind in the left eye.

After his retirement, Yoo started his coaching career in the K League with Daejeon Citizen in 2011. He was diagnosed with Stage 4 pancreatic cancer in 2019 when he was the head coach of Incheon United. He remained with the team only to resign two months after, staying until Incheon avoided being demoted to the second tier league.

News of his death brought an outpouring of mourning and remembrance in Korea.

The Korea Football Association paid tribute, tweeting, “We will forever remember the shouts and glory of your days.”

The Japanese League Yokohama F. Marinos, where Yoo spent two years playing, lamented that “It is a pity that we could not keep our promise to meet again.”

Incheon United expressed their condolences saying, “We will remember your passion forever. Thank you and rest in peace,” as other K league clubs joined the memorial.

Hwang Sun-hong, Choi Yong-Soo, Kim Nam-il and other colleagues who were at the 2002 World Cup with Yoo paid their condolences at the funeral home.

The national football team will also play tribute to Yoo at the World Cup qualifiers tomorrow, screening a tribute video on the electronic display before the match against Sri Lanka.

The Korea Football Association agreed with the Red Devils, the official supporters of the national team, to not cheer in the first six minutes of the game to commemorate Yoo’s national team jersey number, No. 6.

Yoo is survived by his wife and two children.