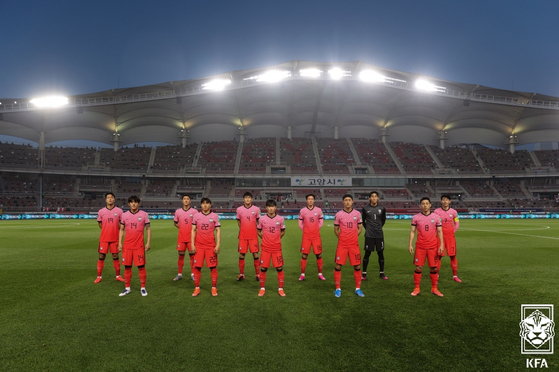 
The Taeguk Warriors will continue the second round of World Cup qualifiers with a game against Sri Lanka on Wednesday, looking to build on the success of a big win against Turkmenistan over the weekend.

The Korean national team currently leads Group H in the second round of Asian World Cup qualifiers with two games left to play. Korea is first with 10 points, followed by Lebanon, also with 10 points but behind on goal difference, Turkmenistan with six points, and Sri Lanka with zero. North Korea has withdrawn from the tournament.

Regardless of the outcome of the remaining two matches — against Sri Lanka on Wednesday and Lebanon on Sunday — both Korea and Lebanon are guaranteed spots in the third round of Asian qualifiers.

Korea will take on Sri Lanka, the lowest-ranked team in Group H at No. 204, at 8 p.m. on Wednesday at Goyang Stadium in Goyang, Gyeonggi.

The two teams have already met — Korea won the first leg 8-0 on Oct. 10, 2019, with two goals from captain Son Heung-min, four from Kim Shin-wook and one each from Hwang Hee-chan and Kwon Chang-hoon.

The June 9 game should actually be the Sri Lankan leg of the fixture, but because of Covid-19 travel limitations, all remaining Group H games are being played in Korea as the central point within the group. 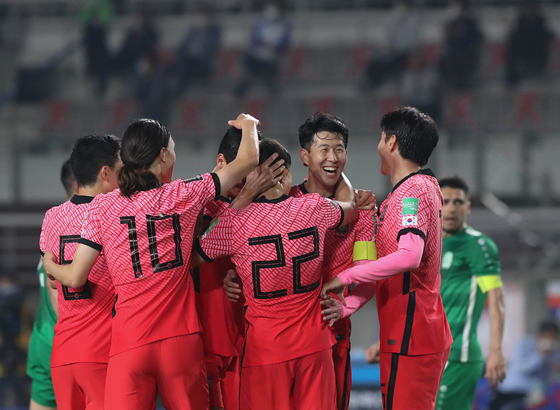 The Taeguk Warriors celebrate a goal by Kwon Chang-hoon during a Group H match between Korea and Turkmenistan at the FIFA World Cup Qatar 2022 qualifiers held in Goyang Stadium in Goyang, Gyeonggi on Saturday. [YONHAP]


The Taeguk Warriors go into Wednesday’s game on the back of a big victory against Turkmenistan at the weekend. Korea cruised to a decisive 5-0 win over the central Asian side with two goals from Hwang Ui-jo and one each from Nam Tae-hee, Jung Woo-yeong and Kwon.

Over the two legs against Turkmenistan, ranked at No. 130 in the world, Korea scored seven goals and conceded zero. The Taeguk Warriors are already eight goals up against Sri Lanka and will be looking to capitalize on that dominance in Wednesday’s game.

The top team from each group in the second round qualifies for the third round of qualifiers, alongside the four best second-place teams. Based on the number of goals both teams have scored, Korea and Lebanon will both reach the third round regardless of whether they top the group or not.

The 12 teams that reach the third round will be sorted into two groups of six, again playing round robin home and away matches. The top two teams from each group will immediately qualify for the World Cup, while the two third-placed teams will play each other for the right to compete in the inter-confederation playoffs.