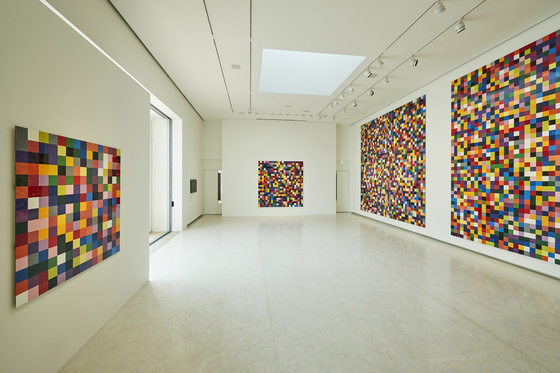 
Although there are emerging rivals, such as Itaewon in Yongsan, the center for juxtapositions of art and fashion in Seoul is still Cheongdam-dong in Gangnam, where the flagship stores of several famous luxury fashion houses all have built-in art spaces. Among them, the Espace Louis Vuitton Seoul is holding a solo show of Gerhard Richter, 89, one of the world’s most influential contemporary artists.

The art space is on the fourth floor of Louis Vuitton Maison Seoul, which was designed by the renowned architect Frank Gehry and opened in 2019. The Canadian-born American architect also designed the Fondation Louis Vuitton, an art museum in Paris supported by the fashion brand and other luxury brands belonging to LVMH. A miniature of the museum and the related archive are also on view at the Espace Louis Vuitton Seoul. 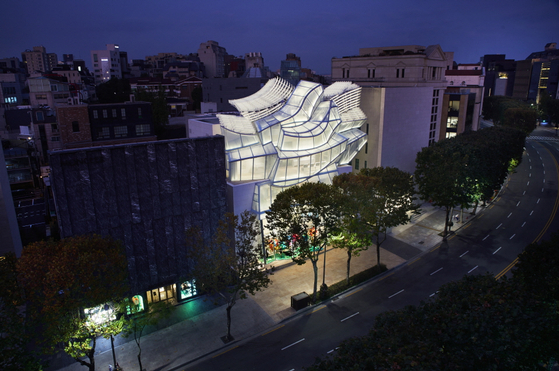 A view of Louis Vuitton Maison Seoul, which was designed by the renowned architect Frank Gehry and opened in 2019. [LOUIS VUITTON]


Richter’s solo show consists of four square paintings of kaleidoscopic colors arranged in grids. In fact, they are one work titled “4900 Colours.” The piece consists of 196 square panels, each of which consists of 25 squares of different colors, configured into four paintings. The artist conceived “4900 Colours” to be configured in a number of versions, from one gigantic-scale piece to multiple, smaller pieces. The configuration in Espace Louis Vuitton Seoul is Version IX.


“The work was inspired by Richter’s 2007 project to re-design the south transept window of Cologne Cathedral, which replaced the stained glass that had been destroyed during World War II,” explained Chae Young-ok, art adviser to Espace Louis Vuitton Seoul. Richter designed the new window to consist of 11,500 hand-blown squares of glass in 72 different colors derived from the palette of the original medieval glazing. The artist generated the distribution of colors in the window by using a computer program.

In parallel, Richter created “4900 Colours” with 25 different colors, derived from the industrial color chart. “From a certain angle, the ‘4900 Colours’ panels also look like opaque stained glass, whereas they look just like oil paintings from a distance,” Chae said.

Richter has hovered between figurative and abstract art throughout his career. He showed unquestionable classical painting techniques in his figurative works that re-produced photographs often from newspapers or his family albums into partly blurred images. At the same time, he painted gestural and monochrome abstractions. “In this way, Richter revisits — not without an ironic distance — the history of painting, romantic and sublime themes, and geometric and lyrical abstraction,” the Fondation Louis Vuitton in Paris, from which the collection “4900 Colours” has come to Seoul, wrote on its website.


The exhibition runs through July 18. Admission is free.