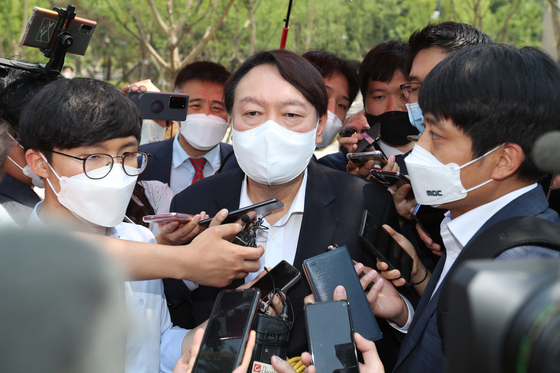 Former Prosecutor General Yoon Seok-youl is asked questions by reporters as he makes his way to the opening of the Woodang Memorial Hall in central Seoul on Wednesday. [YONHAP]


Former Prosecutor General Yoon Seok-youl's public appearance at the opening of a memorial hall to an independence activist in central Seoul on Wednesday became a media and political circus as Yoon was swamped by reporters, supporters — and detractors.

Since he cast his ballot during April by-elections, Yoon’s itinerary has remained top secret, with the former chief prosecutor remaining tight-lipped about his political aspirations — if he has any.

As Yoon made his way to the memorial hall in Namsan Yejangjarak Park dedicated to independence fighter Lee Hoe-yeong — also known by his pen name Woodang — he was swarmed by media, asking if he would join the opposition People Power Party and if he would announce a presidential bid. That has been the topic of much speculation since Yoon resigned as head of the state prosecution service after a bruising battle with the Moon Jae-in administration.

In response to media questions Wednesday about his political future, Yoon merely said, “If you watch the path that I am walking, I imagine you will know where I am headed.

“I understand people’s expectations and concerns, and I am listening to all of it. I hope you will continue to watch me,” he said before continuing on his way to the ceremony.

In attendance at the ceremony was Woodang’s grandson Lee Jong-chan, former head of the National Intelligence Service, who conversed at length with Yoon, who was seated beside him. Democratic Party Chairman Song Young-gil and independence activist Yun Bong-gil’s granddaughter Yun Ju-keyng, who is a People Power Party lawmaker, were also in attendance.

Throughout the ceremony, fervent supporters and conservative YouTube personalities shouted their support of Yoon, who they hope to see run as a presidential candidate in next year’s election.

As his supporters continued shouting, “Yoon Seok-youl for President!” the former prosecutor general stood up and asked his admirers to refrain from shouting in the middle of the event. “I am here to attend the opening of the memorial hall,” Yoon said. “Please don’t do this.”

Yoon, who was appointed prosecutor general by President Moon in July 2019, resigned from his post in early March after a protracted struggle with the president’s administration over the ruling Democratic Party's plans to weaken the state prosecution service after it conducted investigations into high profile government figures.

While Yoon himself has remained tight-lipped on the possibility of running for president, a think tank called “Fairness and Common Sense” was launched late last month under the direction of intellectuals who support the idea of the former prosecutor general running for president.

While campaign think tanks are commonly launched to support a presidential candidacy in Korea, this think tank was unusual in that it supports Yoon with little coordination with Yoon himself.

PPP's Yoon became a conservative by fighting a liberal president