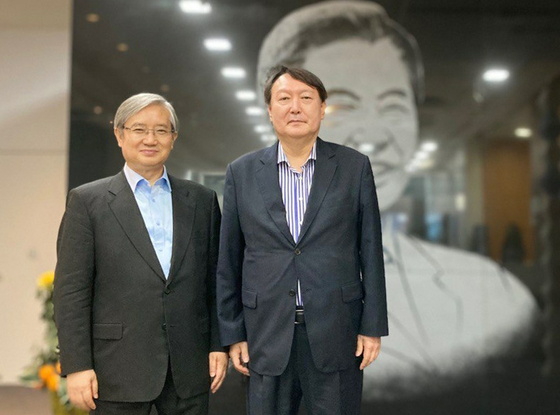 Former Prosecutor General Yoon Seok-youl, right, poses for a photograph with Kim Seong-jae, director of the Kim Dae-jung Presidential Library and Museum in Seogyo-dong, Mapo District, in western Seoul after his visit on Friday. [YONHAP]

Yoon has emerged as a polling frontrunner in the next presidential election despite not formally announcing a campaign or joining a major political party.

“I think mid to late August is when most people have had enough time to make a decision about their political future,” Lee said in an interview with CBS Radio on Monday.

When Lee was asked by radio host Kim Hyeon-jeong if “the [party’s campaign] bus departs in August without exceptions” and if he believes “Yoon will definitely board the bus by that time,” Lee responded, “I have not verified that with Yoon’s camp.”

Lee also clarified his stance on the party’s deadline, saying, “We have no choice but to set a timeline because there are many talented contenders outside the party, and they will want some kind of guideline.”

In a Facebook post that appeared to be a response to the bus metaphor employed during Lee’s interview, Jang Ye-chan, an advisor to Yoon, wrote that “there is no need to intimidate someone into boarding a bus when they can take a taxi directly to their destination even after the bus has left.”

Jang added, “Only the bus driver suffers a loss when the bus leaves without a single passenger,” suggesting that it is, in fact, the PPP that would suffer in the next presidential election if they did not accommodate Yoon’s political movement.

The sparring metaphors between Lee, who represents his party’s interests to coalesce around a nominee sooner rather than later, and Yoon, who is building his own power base and political movement before entering a political party, strike a sharp contrast between the goodwill shared between the PPP chairman and the former chief prosecutor until only recently.

Earlier on Monday, Lee said his party would provide a “big tent” for opposition presidential candidates from both inside and outside the party.

“An integration of opposition forces into our party is coming into view,” Lee said during a party leadership meeting. “My vision lies in establishing a big tent that could gather a large number of outstanding presidential candidates from outside the PPP as well as those inside the party to oppose the Moon Jae-in government.”

Lee’s remarks came as the PPP has been considering the idea of accepting presidential hopefuls from outside the party, such as Yoon and Ahn Cheol-soo, leader of the minor conservative People’s Party, to raise its chances of victory in next March's presidential election.

However, some warned against creating the impression of a conflict between Yoon and Lee.

In an interview with YTN Radio on Tuesday, Yoon’s spokesman Lee Dong-hoon said, “Yoon’s timeline and Chairman Lee’s timeline will not contradict each other.

“As the manager of his party’s presidential primary, Lee spoke as he did because he needs Yoon to join the party by August. Yoon is mindful of this calendar and watching public opinion.”