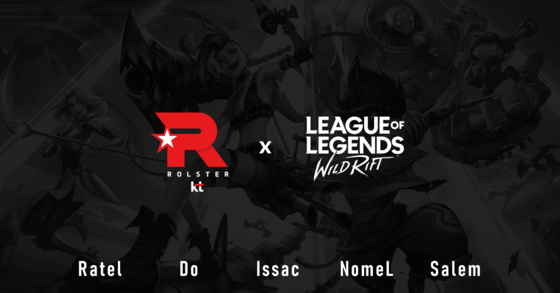 This makes KT one of the first clubs in Korea to enter Wild Rift esports, and the first League of Legends Champions Korea franchise to do so.

Wild Rift, the mobile adaptation of League of Legends, was launched last October in Korea. This May, Riot Games revealed that the game's first global tournament will be held in the fourth quarter this year. Plans for the domestic circuit are also expected to be shared soon.

"As the oldest professional esports organization in Korea, we are now looking to lead the way in mobile esports," said KT Rolster's director of operations, Shin Ki-hyuk. "We hope to become the best team in not just Korea, but the world."

Four of the five players have at least two years of professional experience in the genre, having previously competed in Honor of Kings, the mobile multiplayer online battle arena (MOBA) title published internationally as Arena of Valor.

Do, Salem and Issac previously played together on ROX Gaming's 2019-20 squad, while NomeL hails from ESC. During that time, Issac went by "BaM," and NomeL by "egon."

Whether Korea will be able to enjoy a period of international pre-eminence in competitive Wild Rift, as it previously has in many premier esports including StarCraft II, League of Legends and Overwatch, is yet unclear.

The nation's advanced infrastructure and culture surrounding PC gaming, which facilitated its early dominance in the aforementioned scenes, is unlikely to be as relevant in mobile esports.

The fate of the 20 million trees burned in wildfire (KOR)

The fate of the 20 million trees burned in wildfire

Boy band TAN to make its official debut on March 10