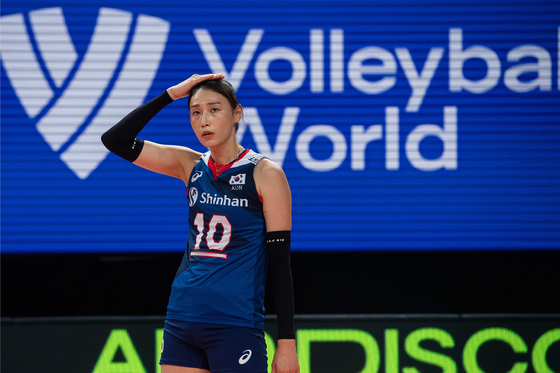 
The Korean national volleyball team lost in straight sets against Germany at the 2021 Women's Volleyball Nations League in Rimini, Italy, on Tuesday.

This is Korea’s seventh consecutive loss since its first win against Thailand on May 26. Korea has eight losses in total, five of which were lost in straight sets and two with a score of 1-3.

Despite captain Kim Yeon-koung and veteran Lee So-young back on the court after sitting out the previous game to rest, Korea ended the first set of the game with a disappointing 25-12, the worst score Korea has gotten against any opponent at the Nations League this season. At set point, Korea’s unforced error finished the set.

Korea fought back hard in the second set with long rallies to lead the set 7-3, but Germany caught up little by little until a 16-16 tie, after which Germany stepped up and eventually a block defense from Germany finished the match 25-21.

Korea started out leading the third set and tied at 20-20, but was then only able to score two more while Germany scored five, finishing the last set 25-22.

With this win, Germany put an end to their five-match losing streak. With three wins and six losses, Germany is 12th on the table, whereas Korea is 15th out of 16. Thailand is on the bottom of the table with no wins.

Tuesday's game against Germany was similar to Korea's previous game against the United States in that 20 points, out of 55 points that Korea made, were from opponent errors.

Korea's best scorer of the game was Park Jeong-ah with 13 points. Kim scored 10 points. The best scorer for the German team was Hanna Orthmann with 19 points.

Team Korea’s captain is hopeful that they will do better in their upcoming matches.

“When we were preparing for this match, we wanted to be prepared to take home a win,” Kim told the Volleyball World after the match.

“Unfortunately, we lost the game, but we feel that our team is getting stronger in our performance. […] But from now on, we will do our best to get better. Since our team is a totally new team, we still have to improve our connections."