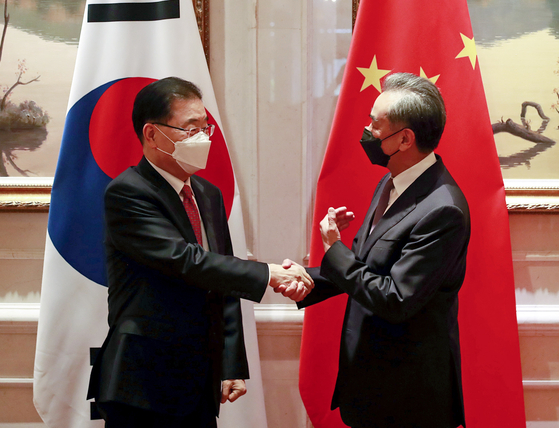 
Korean Foreign Minister Chung Eui-yong said he hopes relations between Washington and Beijing will develop in a "stable manner" in a phone call with Chinese Foreign Minister Wang Yi, who warned Korea against taking sides in the "confrontational" policies pursued by the United States.

The phone conversation between Chung and Wang, China's state councilor and foreign minister, came days ahead of a Group of Seven, or G7, summit in Britain this week, at which Washington is expected to urge its allies and partners to join its campaign to contain Beijing's growing assertiveness.

Chung told Wang that he "hoped that U.S.-China relations would develop in a stable manner, as cooperation between the U.S. and China in responding to global challenges is in the interest of the international community," said the Korean Ministry of Foreign Affairs in a statement.

According to the Chinese Foreign Ministry in a statement released Thursday, Wang told Chung that Seoul and Beijing should not allow their relations to be taken off track by Washington's strategy in the so-called Indo-Pacific region.

China "firmly opposes" the United States' Indo-Pacific strategy, described as being "full of Cold War mentality" and liable to stir up "confrontation among different groups, which is not conducive to regional peace, stability and development," said the statement.

Wang told Chung, "As friendly neighbors and strategic partners, China and the Republic of Korea should know well the rights and wrongs, stick to the correct position, abide by political consensus and never be misled."

Noting the "rapidly changing" international and regional situation, Wang was said to have stressed that it is necessary for Seoul and Beijing "to strengthen communication in a timely manner."

Beijing's Foreign Ministry quoted Chung as conveying that Korea attaches great importance to developing the strategic cooperative partnership with China, adheres to the "One-China" principle and recognizes the sensitivity of cross-strait relations, meaning with Taiwan.

Such remarks were not included in Seoul's Foreign Ministry statement on the phone call.

The Chinese Foreign Ministry last month expressed concern about a joint statement by Korean President Moon Jae-in and U.S. President Joe Biden after a summit on May 21 referred to the "importance of preserving peace and stability in the Taiwan Strait." The Moon-Biden statement also called for the "freedom of navigation and overflight in the South China Sea."

The Chinese Foreign Ministry added that the two sides should speed up the second phase negotiations on the Korea-China free trade agreement (FTA) and strengthen cooperation in high technologies and emerging industries, and "continuously promote and deepen high-quality integrated development."

Seoul and Washington agreed to collaborate in areas including emerging technologies, semiconductors and supply chains in the recent summit.

Noting that next year marks the 30th anniversary of the establishment of diplomatic ties between the two countries, Wang also relayed that the two sides should "create a sound atmosphere and necessary conditions for the continued and steady development of bilateral relations."

Chung and Wang held a face-to-face foreign ministerial meeting on April 3 in Xiamen in China's Fujian Province, across from the Taiwan Strait.

The talks came before Moon kicks off a trip to Britain to take part in the G7 summit in Cornwall from Friday to Sunday as an observer country alongside Australia, India and South Africa.

A Seoul Foreign Ministry official told reporters Thursday that the phone call came at the request of Chung and that "It was a frank atmosphere," rather than a threatening one, which was how it was described in some domestic reports.

There was no mention of the U.S.-led Terminal High Altitude Area Defense (Thaad) antimissile system deployed in Korea, he added.

Seoul's Foreign Ministry in its statement said that the two sides recognized that high-level exchanges are important in deepening and developing Korea-China relations and agreed to continue planning for a visit by Chinese President Xi Jinping to Korea "in the near future" as soon as the Covid-19 situation is stabilized.

Chung and Wang "reaffirmed the common goals of realizing denuclearization and establishing permanent peace on the Korean Peninsula," added the ministry.

They also discussed strengthening cooperation between Korea and China in responding to major issues such as climate change.

Chung expressed appreciation that both the United States and China supported the Seoul Declaration at the P4G Summit last week.

Chinese Ambassador to Seoul Xing Haiming echoed a similar message in a radio interview with CBS Thursday, describing the U.S. Indo-Pacific Strategy as a policy to contain China and noting that the United States has a tendency to be stuck in the mindset of the Cold War.

He added that he hopes Korea "takes into more consideration China's position on the Taiwan and South China Sea issues."

Noting that he "values" the 30 years of development in Korea-China relations, Xing said, "It would be good if we are not affected" by the U.S.-China rivalry.