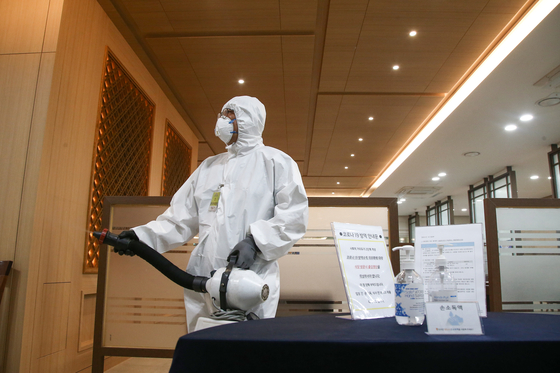 A sanitization worker disinfects the main building of the National Assembly on Friday after the legislature was temporarily shut due to four Democratic Party members testing positive. [YONHAP]


The National Assembly was temporarily shut Friday after four members of the ruling Democratic Party (DP), including a lawmaker, tested positive for Covid-19.

It is the third time the legislature has been shut for disinfection measures. Major buildings inside the National Assembly compound will be closed until Saturday.

Other members of the DP who had close contacts with Ahn were also tested and started self-quarantine. Defense Minister Suh Wook, who met with Ahn on Wednesday during the National Assembly’s National Defense Committee meeting, was tested and tested negative.

Ahn tested positive on Thursday following close contact with a person infected with the Covid-19 virus Sunday. He is the second lawmaker to test positive. The first was Rep. Lee Kai-ho of the DP, who was found to be infected in April.

The government said Friday that it will maintain the current social distancing measures for another three weeks, including a nationwide prohibition on social gatherings of five or more people.

As of now, Level 2 social distancing measures are enforced in the greater Seoul area, Daegu and Jeju. The rest of the country is at Level 1.5 in the five-level restriction system.

While the general guidelines will be extended until July 4, some modifications will be made, the Ministry of Health and Welfare said.

Starting July, restaurants, cafes and other entertainment establishments can operate until midnight in the greater Seoul area, two hours longer than the current 10 p.m. curfew. The restrictions on business hours of other facilities, including gyms and spas, will be fully lifted.

On Friday, 556 new cases from Thursday were reported by the health authorities. Since January last year, the country has recorded 146,859 cases.

As of Friday, nearly 10.57 million people had received their first Covid-19 vaccines, 20.5 percent of the total population. Nearly 2.64 million, or 5.1 percent of the population, are fully vaccinated.

DP's prosecution bill shenanigans denounced by some in DP