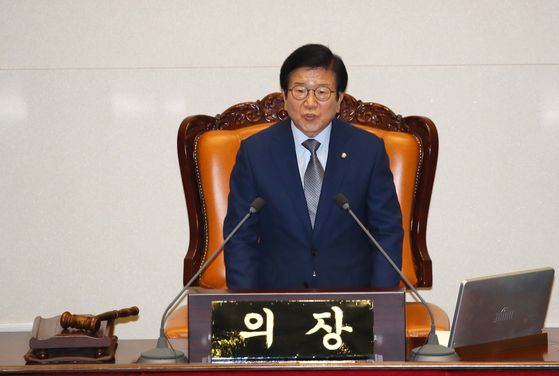 Park hosted a plenary session in the afternoon and told the ruling Democratic Party (DP) and the main opposition United Future Party (UFP) that they have until Monday to complete the formation of 18 standing committees.

“Despite the serious national crisis and worsened hardships in people’s livelihoods, we failed to complete the formation of the committees,” Park said. “I apologize to the people for the delay.”

Park said the chief negotiators of the DP and the UFP held several rounds of negotiations and saw some progress, but failed to strike a final agreement.

“As the speaker, I am giving one last three-day extension to urge the ruling and opposition parties to compromise,” Park said. “I will open a plenary session on Monday and elect heads of standing committees no matter what happens.”

Since late May, the DP and the UFP have been debating on how to structure the legislature, which formally began its four-year term on May 30. No progress, however, was made, with the DP insisting it will chair all 18 standing committees, based on its overwhelming majority. The party controls 176 of the 300 seats in the Assembly, while the UFP controls 103.

The UFP has argued that the National Assembly must respect the long-standing tradition of splitting the chairman posts proportionally to the number of lawmakers each party has.

Their proposal calls for the DP chairing 11 committees and the UFP chairing seven, including the powerful Legislation and Judiciary Committee. The final gatekeeper of all bills before they head to a voting session, the committee has traditionally been headed by the main opposition party.

After a series of negotiations, the DP and the UFP reached a tentative compromise Thursday night.

The UFP lawmakers, however, decided to reject the plan Friday morning. Rep. Joo Ho-young, floor leader of the UFP, said the DP highhandedly drafted the plan, without listening to the UFP’s opinions.