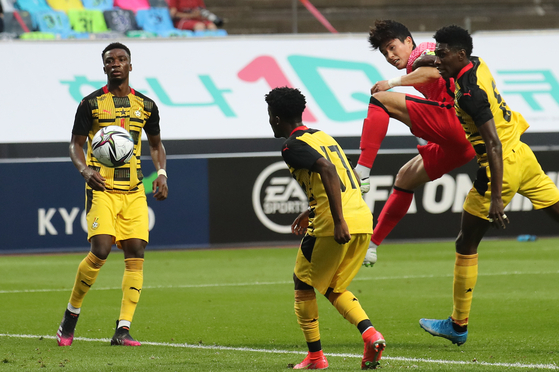 
The Korean U-23 squad beat Ghana 3-1 in a pre-Olympic friendly on Saturday at Jeju World Cup Stadium in Seogwipo, Jeju, overcoming an early red card to take a comfortable lead over the African team.

Head coach Kim Hak-bum fielded a mixed squad on Saturday, leaving some of the bigger names on the bench as he looked to see how the young players would perform on the field.

The focus on individual performance over teamwork was clearly intended to help Kim choose who would make the starting Olympic squad, but at times it meant Korea missed opportunities as players looked to shine on their own rather than work together.

Korea’s first chance came in the ninth minute, when a neat one-two put Lee Seung-woo in front of the goal, only for the Portimonense forward to struggle to control the ball and lose possession. Moments later, Cho Gue-sung was set loose in the box, kicking the ball straight into an opposing defender.

These early teething troubles were quickly forgotten in the 17th minute, when the young Taeguk Warriors started to gel as a team. Captain Lee Sang-min took the first goal, neatly heading a well-placed cross straight into the back of the net to take the score to 1-0.

Korea’s next great opportunity came in the 33rd minute, when Kim Jin-kyu of Busan IPark dribbled through two defenders and then nutmegged a third with a shot that evaded the goalkeeper but ended up inches wide of the Ghanaian goal.

Just minutes later, Korea went down to 10 men when Kim Jin-ya was sent off following a poorly timed tackle that ended with his studs raking the opposing player’s foot. 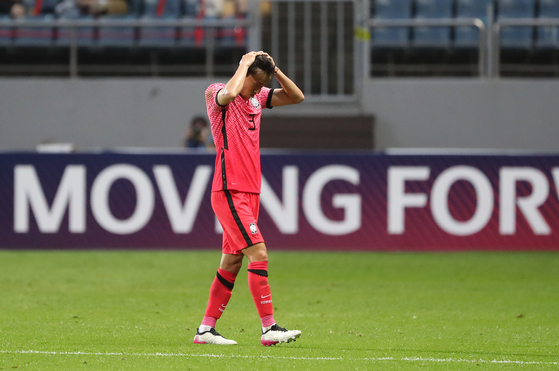 Kim Jin-ya leaves the pitch after receiving a red card for a poorly timed tackle against a Ghanian player at Jeju World Cup Stadium in Seogwipo, Jeju on Saturday. [YONHAP]


The play was originally ruled a foul with no card given, but after the referee reviewed footage from the video assist referee (VAR) — used in the friendly because it will be used in the Olympics — Kim was shown a red card.

Neither team was able to get anything across for the final 10 minutes of the first half, going into the break with Korea up 1-0 but down one man.

That missing man was obvious when play resumed, as Ghana took charge, taking the game well into Korean territory with repeated attacks in the first few minutes of the half. 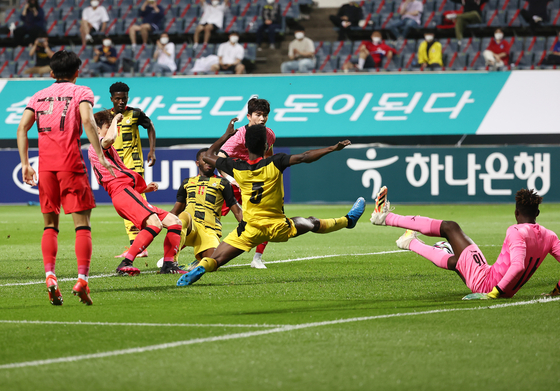 The addition of the three players breathed new life into the Taeguk Warriors. Less than a minute after running on to the pitch, Lee Seung-mo scored Korea’s second goal, picking up a deflection in the middle of a goalmouth scramble and knocking it straight back into the net.

Goal No. 3 followed just minutes later, when a perfectly placed cross found Cho in the box. The forward turned between two defenders, slotting the ball over the goalkeeper to take the score to 3-0. 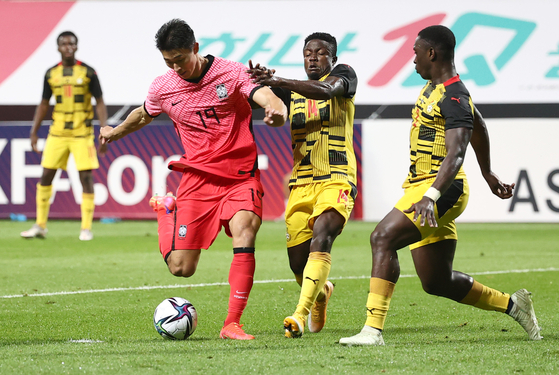 
Ghana took one back in the 75th minute after Korea’s defense gave up the ball with a poorly timed pass. The goal took the score to 3-1 and put both teams on an increasingly physical all-out offensive for the final 15 minutes of the game.

Neither team was able to get anything across despite multiple chances in the dying few minutes of the game, and the score ended with Korea beating Ghana 3-1.

The 3-1 result is a solid win for the U-23 team in their first pre-Olympic friendly. The early red card could have been a devastating blow, but the young players worked around the hole in the lineup, scoring two more goals and preventing many more for Ghana despite the disadvantage.

The Ghanaian U-23 team lost 6-0 to Japan last week, a score that Korea might have liked to replicate at Jeju World Cup Stadium on Saturday. But as Kim Hak-bum is still building his squad — Korea made seven substitutions to Ghana’s three — the 3-1 result is still a decisive victory for a young team that is yet to really start working together.

The current U-23 squad will form the backbone of the team that plays at the Tokyo Olympics next month, with the addition of a few players that are currently on duty with the senior national team and three wildcards. Korea has seen success at the Olympics recently, winning Bronze at London 2012 and coming fifth at Beijing 2016.

This year Korea ought to have an easy path to the knockout stage, having been drawn in Group B alongside New Zealand, Honduras and Romania. They will play their first match on July 22 against New Zealand.

Korea and Ghana will play another pre-Olympic tune-up game at 8 p.m. on Tuesday, also at Jeju World Cup Stadium.

The Korean senior squad will be back in action on Sunday in a World Cup qualifier against Lebanon at Goyang Stadium in Gyeonggi at 3 p.m. The final game is a formality for Korea, as it has already qualified for the third round of qualifiers. Lebanon will also likely reach the next round as one of the highest-ranked second-place teams.