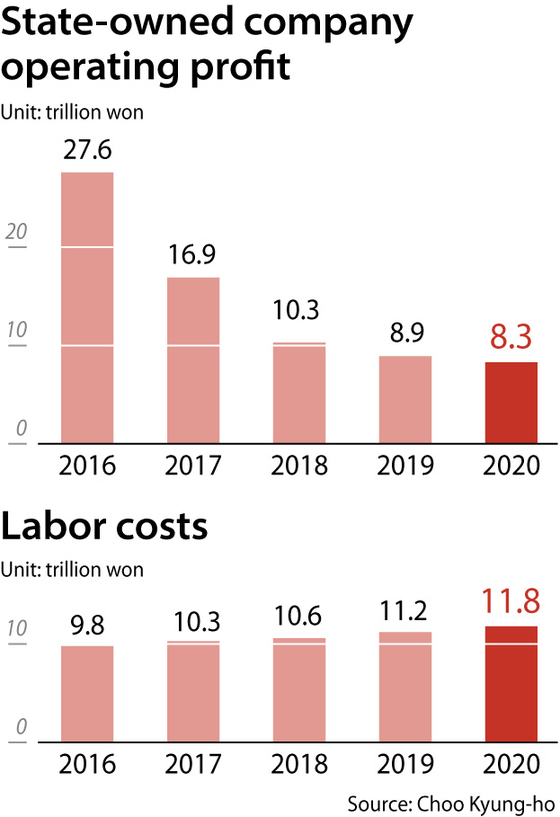 The combined operating profits of 36 state-owned companies have fallen 70 percent since 2016, according to data compiled by People Power Party lawmaker Choo Kyung-ho.

This sharp drop, according to the opposition party lawmaker, is not only the result of the poor performances of public companies but also increased costs from the Moon government policy of converting non-regular employees working at the state-owned companies to regular employees.

Profits at state-owned companies have been declining every year since the Moon government took office, and the number of companies that are suffering operating losses has increased from 5 in 2016 to 17 in 2020, according to the lawmaker.

The seven energy companies, including the nation’s only power distributor, Korea Electric Power Corp. (Kepco), have been reporting worsening results.

Kepco in 2016 generated 69 percent of the combined operating profits of state-owned companies.


Rising crude prices and the phaseout of nuclear energy were to blame.

Kangwon Land, operator of the only casino that allows Koreans, as well as the Korea Racing Authority (KRA) and Incheon International Airport Corp. turned to red last year as business dropped during the pandemic.

The net profit was even worse.

While business-wise the state-owned companies have been hurting, labor expenses have been rising.

During this period, the government aggressively increased its hiring and converting of irregular employees to regular employees, which was a promise made by President Moon.

Debt owed by the state-owned companies has increased 9.6 percent from 363 trillion won to 397.9 trillion won during the Moon administration.

“Public companies have been used for the purpose of stacking up the government’s achievements,” Choo said. “And this has resulted in falling profitability as a result of high-costs and low efficiency.”

The lawmaker said public companies have been weakened by the phase out of nuclear power and the conversion of contract workers to regular employees.

“This could affect the quality of public services while increasing costs,” Choo said. “Past government worked on reforming public companies, but this government doesn’t even pretend, which is a serious problem.”

Public companies are set up by the government to push projects that require massive investment for the public good.

These companies profit from the dominance in the market guaranteed by the government.

The evaluation plays a vital role in determining the size of the subsidies from the government as well as wages and bonuses.

“Public companies are organizations that not only have to serve the public interest but also have to perform,” said Park Young-bum, Hansung University economics professor. “However, the current government puts more emphasis on public interest, such as the number of new hires or the number of employees converted to regular employees, when making their evaluations.”
“If the pubic company follows through, they get high grades and therefore there’s no incentive for the public companies to improve their performances or increase their management efficiency.”

The professor said while the Moon government ends in a year, the weakness of public companies will have a significant impact on future generations.

Despite the shrinking population and colleges struggling, Kepco is building an engineering university in Naju, South Jeolla, investing 1.6 trillion won.

The Land and Housing Corp. (LH) since early this year has been at the center of a national controversy after its employees reportedly tried to profit from government-led development projects using insider information.

Yet pay has been increasing.

Even though 15 companies last year reported losses, each employee on average received 14.1 million won in bonuses.

The companies said the bonuses were based on the performance in 2019.

“The actions taken by public companies are difficult to understand considering how the rest of the people, including those at private companies, and average households have been tightening their belts amid Covid-19,” said Kim Kwang-doo, head of The Institute for the Future of State.