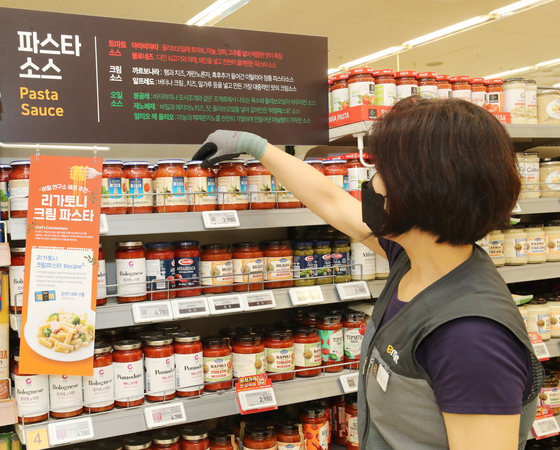 An employee displays pasta sauces at Emart’s Seougsu branch in eastern Seoul. At Emart, some 100 different pasta sauces are available so far. [EMART]

The Korean diet is changing quickly, with foods commonly considered western slowly crowding out Korean standards at the table, a trend that appeared to accelerate this year, retailers have noticed.

According to Emart, pasta sauce was the second most popular choice for Korean consumers in the seasonings and sauce category in terms of sales from Jan. 1 to May 31. Soy sauce was No. 3 while gochujang, or hot pepper paste, was No. 6. Jang is a Korean word that refers to sauce,

In 2019, soy sauce ranked second and gochujang third, while pasta sauce was ranked No. 5.

Last year when the coronavirus hit the country, pasta sauce placed third in terms of sales ahead of gochujang.

“We were also surprised that pasta sauce, which is one of the most common sauces in Western countries, has been more popular than gochujang and soy sauce,” Moon Ji-myeong, a buyer of seasonings and sauce at Emart, said. “As the pandemic lingers, more consumers are considering pasta as the alternative to rice.”

At Emart, sales of pasta and pasta sauce rose 33 percent last year compared to the previous year. Sales in the first five months of the year increased 10 percent on year.

Along with pasta, sandwiches and salads are also receiving attention. 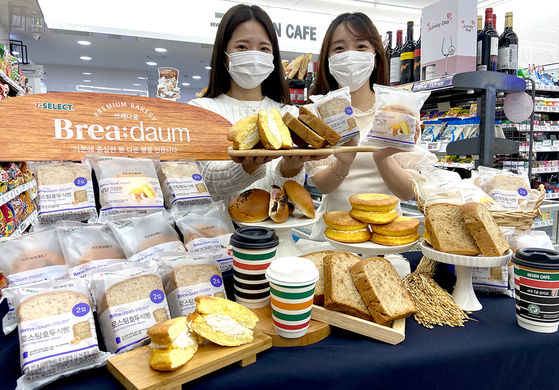 Models pose with various breads from Brea;daum, a bakery brand from 7-Eleven. [7-ELEVEN]


“In the past, salads and bread were just types of side dishes for Koreans, but now they consider them as a full meal,” said a spokesperson for Emart. “We came up with five new salads and nine sandwiches recently.”

Sales of salads at Emart jumped 77 percent in the first five months of the year compared to a year earlier.

Young people in their 20s and 30s drove the popularity.

Convenience stores are scrambling to strengthen their bakery product lineups to target the young customers.

On Jan. 5, GS25 started Breadique, its own bakery brand. Breadique has 30 bread products, and it sold 7.5 million items as of end of May. 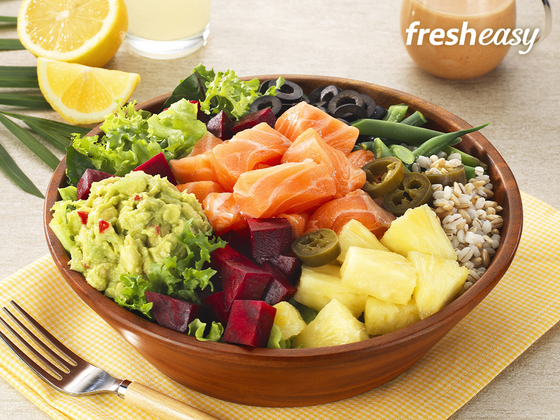 Late last month, CU introduced Pain de franc, its own bread brand, and plans to come up with 20 new bread offerings by mid-July. Most of them will be priced at around 2,000 won, according to CU, as it targets customers with price competitiveness.

7-Eleven entered the competition with its own Brea;daum in April. Its sales of bakery products rose 70 percent after the introduction of the brand.

In particular, young people like to have salads with various toppings, like salmon, shrimp and beef. They consider hearty salads as a good alternative to rice.

“The market size of fresh fruits and vegetables was at 1 trillion won last year,” said a spokesperson at Fresheasy, a meal kit start-up based in Gangnam District, southern Seoul. “Salads, which were only popular for people who on a diet, have now become a full meal for young people. Korea’s salad market is likely to grow further.”

Fresheasy’s sale of salads jumped 70 percent last year compared to the previous year. Its sales between January and April this year rose 8 percent on year.