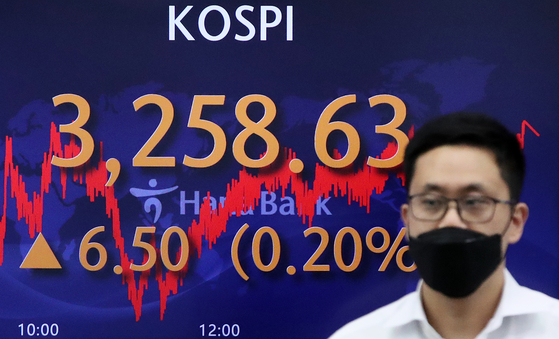 A screen in Hana Bank's trading room in central Seoul shows the Kospi closing at 3,258.63 points on Tuesday, up 6.5 points, or 0.2 percent, from the previous trading day. [NEWS1]


Stocks hit a record for the second straight day Tuesday, propelled by investors' optimism over the U.S. Federal Reserve meeting this week. The won fell against the dollar.

Trading volume was moderate at about 1.7 billion shares worth some 14.5 trillion won ($13 billion), with losers outnumbering gainers 443 to 399.

The Kospi started off with mild gains, tracking record advances on the Nasdaq and the S&P 500 overnight.

Stocks traded in a tight range as investors waited for more clues about when the world's largest economy will start tapering its asset-buying policy. The Federal Open Market Committee rate decision comes Wednesday.

Stocks rebounded to positive terrain in the afternoon, largely on advances by tech and chemical shares.

"It is unlikely that the Fed will pull a hawkish card in the FOMC meeting," he said.

The local currency closed at 1,117 won against the dollar, up 0.3 won from the previous session's close.