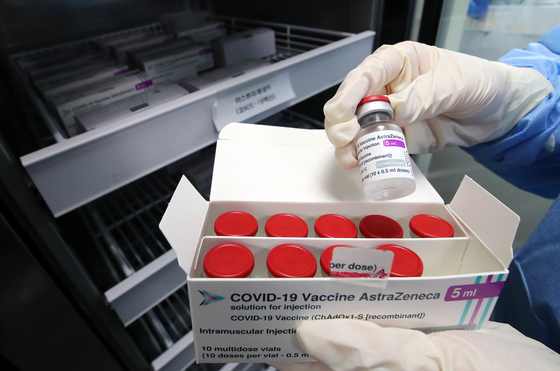 A medical professional holds a box of AstraZeneca vials. [NEWS1]


While the government pushes to speed up Covid-19 vaccinations, some people have seen their first AstraZeneca appointments abruptly canceled after vaccine supplies fell short across the country.

Mr. Choi, 62, who booked his first appointment for his first dose of the AstraZeneca vaccine, received an unexpected text from the hospital on Tuesday — his reservation for Friday has been postponed due to overbooking.

Choi’s daughter called the hospital to ask for further details, but all they got in return was a response saying that the AstraZeneca supplies have run out due to high popularity, and that the hospital will make sure Choi gets his shot first in July.

Korea is planning to open up inoculations for people in their 50s and high school seniors from July.

“I booked a KTX train ticket for my inoculation on Friday, but [the appointment] has been canceled,” Choi said. “It’s frustrating because I’m unable to prepare unless they notify the schedule in advance.” Choi lives with his daughter in Seoul but booked his vaccine appointment in Daegu.

Similar cancellations have left people like Choi confused and scrambling for the elusive vaccine appointments elsewhere in the country.

“My parents were booked to get an AstraZeneca vaccine on June 19, but yesterday they got a call from the hospital saying that they cannot get inoculated because the hospital is running out of AstraZeneca supplies,” one user wrote in an online community of Bundang District in Seongnam, Gyeonggi.

“I thought hospitals received reservations accordingly after checking their supplies, so this is confusing,” the user added.

Another user claiming to be a nurse in Suwon, Gyeonggi, wrote, “Only 20 doses out of the 30 scheduled arrived at our hospital. We’ve been notified that vaccine supplies are running out nationwide, and some of those who are booked on June 18 and 19 may not be able to get their shots.”

Still some citizens were recommended to apply for shots in other areas where vaccine supplies were relatively sufficient.

A citizen in Daejeon was notified by a hospital to get a shot at a medical clinic in another city, Gyeryong in South Chungcheong, which is more than 20 kilometers (12 miles) away.

Korea received reservations for the elderly aged 60 to 74 for AstraZeneca vaccines from May 6, and started inoculating from May 27. The inoculations will be conducted through this Saturday.

Health authorities reiterated the importance of seniors registering for vaccine shots many times, saying that the elderly population has a higher risk of fatality or serious illness than other age groups.

Despite the government’s best efforts to vaccinate as many seniors as possible, those who have long been waiting for their vaccination expressed anxiety and frustration over such short notice of the cancellation.

“Currently, 8.06 million doses of AstraZeneca have been supplied to Korea so far, and the total current stock is about 2.04 million. We’re estimating around 360,000 seniors aged 60 to 74 are overbooked," Jeong Eun-kyeong, commissioner of the Korea Disease Control and Prevention Agency (KDCA) said during a briefing on Monday.

“There are differences depending on the area, but it is possible that some people who booked for the 18th to 19th will not be able to get the AstraZeneca vaccine,” another KDCA official said.

Health authorities are planning to either collect the leftover vaccines from canceled appointments and supply them to other medical facilities that are lacking doses, or use low dead space (LDS) syringes to inoculate 12 people with one vial that would normally inoculate just 10 people using normal syringes. Some may get Johnson & Johnson’s Janssen vaccine instead, which is currently being given to military-affiliated personnel.


The KDCA plans to come up with measures that would give priority to the canceled citizens to get inoculated first in July, and will announce details of the inoculation plan for the third quarter on Thursday. 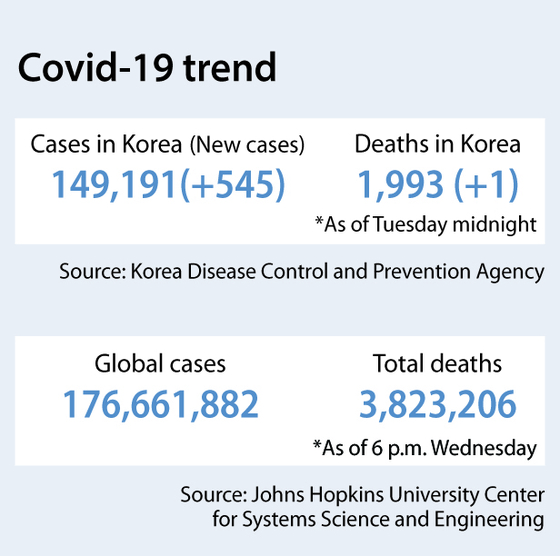 There was one additional virus death, raising the total to 1,993.

Chance for Moon to shine

AstraZeneca's shot gets the nod from a panel of experts