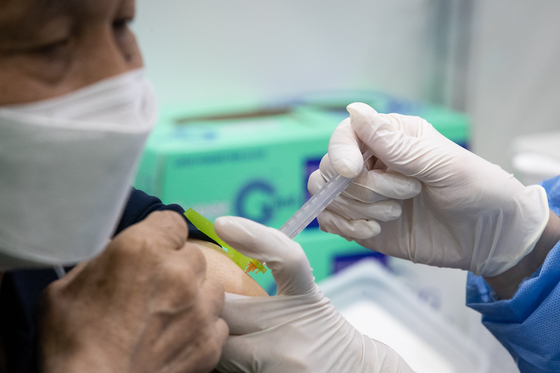 An elderly man a receives Covid-19 vaccine at the Dongdaemun Stadium in Seoul on Thursday. [NEWS1]


Korea's Covid-19 vaccination campaign is gaining momentum as over 80 percent of the elderly population have either signed up for or have already received a shot, or two, as of Friday.

According to the vaccination team at the Korea Disease Control and Prevention Agency (KDCA), 80.6 percent of people aged between 60 to 74 signed up for the program before the deadline on Thursday. Of the 9.086 million people eligible to receive AstraZeneca shots, nearly 7.328 million signed up, the KDCA said.

Separately, there are 8,072 people with severe and chronic respiratory diseases who are eligible for the AstraZeneca vaccine, and 68.5 percent have reserved their shots.

The government also took reservations from workers and teachers at child care centers and kindergartens. First- and second-grade teachers at elementary schools nationwide were also eligible. Out of this whole group of 375,193 people, 82.4 percent signed up.

He also noted the exceptional turnout, saying, "As of yesterday, the turnout was 99.8 percent. Almost everyone who signed up for a vaccination showed up and got their shot, unless they were ill."

"The elderly will finish getting their first shots by the end of June, and the fatality rate will start going down," Son said. "The general public will start their shots in July, August and September, so we believe the pandemic will subside starting early August."

Saturday marks the 100th day since Korea started its Covid-19 vaccination program. By the end of Thursday, 13.8 percent of the total population had gotten their first shots since the vaccine rollout on Feb. 26, and 4.4 percent are fully vaccinated.

According to the government, 4.5 million received AstraZeneca shots and 2.5 million were administered Pfizer vaccines.

Authorities say they will be able to achieve their goal of inoculating over 13 million — or a quarter of the nation's total population — by the end of June.

The KDCA said Friday that 695 new cases, including 674 local infections, were reported Thursday. The total caseload of the country is 133,289.

One additional death was reported, raising the toll to 1,969.

Meanwhile, the U.S. supply of Johnson & Johnson's Janssen vaccine for 1 million people is scheduled to arrive in Korea on Saturday. 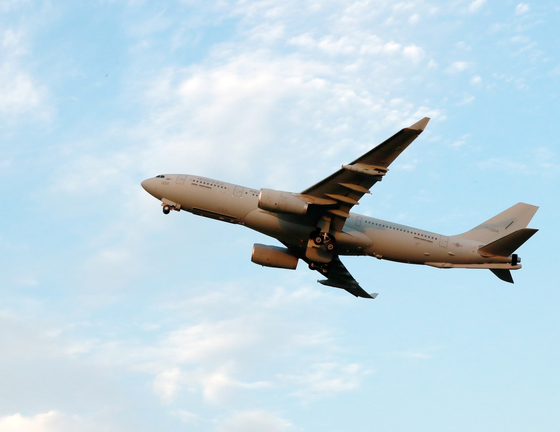 The Korean Air Force's KC-330 aerial refueling aircraft takes off Gimhae Airforce Base in Busan on Wednesday to head to the United States. The aircraft will carry 1 million doses of Jassen vaccines offered by the United States and return to Korea on Saturday. [YONHAP]


Last month, U.S. President Joe Biden promised to send the supply after his summit with President Moon Jae-in at the White House. The vaccines are intended for Korea's 550,000 armed services members, since they work closely with U.S. troops stationed in Korea, Biden said.

"After making a 2,000-mile journey to California, these 1 million doses are being loaded into a plane that will take off to the Republic of Korea this evening, carrying hope and bringing life-saving protection to the 1 million South Koreans who have already signed up to get a shot," Jeffrey Zients, White House coronavirus response coordinator, said Thursday in a press briefing.

Korea began accepting reservations for 900,000 out of the 1 million Janssen doses sent by the United States for military-affiliated people aged 30 and over on Monday, which were all booked in 18 hours. Health authorities put aside about 100,000 shots for the elderly population.

Janssen vaccines are not recommended for use in Korea on people under 30 years old, and the government decided to give the U.S. vaccines to military-affiliated personnel, who were originally scheduled for inoculation in the third quarter of the year.

Soldiers under 30 years old, an estimated 410,000 people, will receive Pfizer shots in June as planned. Around 116,000 Korean soldiers aged 30 or over have already received the AstraZeneca vaccine since April.