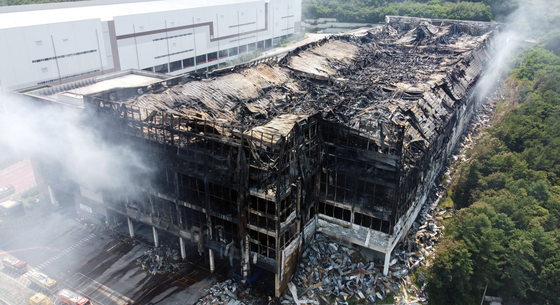 Smokes continues to rise Sunday from Coupang’s Deokpyeong Logistics Center in Icheon, Gyeonggi, which was destroyed by a fire that started Thursday morning. [NEWS1]


The remains of a 52-year-old firefighter trapped in Coupang’s blazing warehouse in Icheon, Gyeonggi, on Thursday were found Saturday.

What appeared to be the remains of firefighter Kim Dong-shik were found in the basement of Coupang’s four-story warehouse at 10:49 a.m. on Saturday – two days after the fire that appears to have been sparked by a power outlet in the basement early Thursday morning.

Kim's remains were discovered 50 meters from the entrance to the basement.

The fire was finally brought under control as of press time on Sunday, but it was not completely extinguished.

The 127,178-square meter Deokpyeong Logistics Center, 80 kilometers southeast of Seoul, was one of Coupang’s largest warehouses. It was used for non-perishable goods.

All Coupang employees at the site were evacuated on Thursday. Firefighters thought they had the blaze under control three hours after it started around 5:20 a.m. Five firefighters entered the basement later that day, but then the fire flared up again.

Kim was the only one unable to make it out. Rescue operations for Kim had to be suspended because of fears the building could come down at any moment.

Flammable materials like vinyl and paper boxes inside the warehouse made it difficult to bring the fire under control.

Public officials including Prime Minister Kim Boo-kyum came to the hospital mourning altar in Hanam, Gyeonggi, to pay their respects to firefighter Kim. 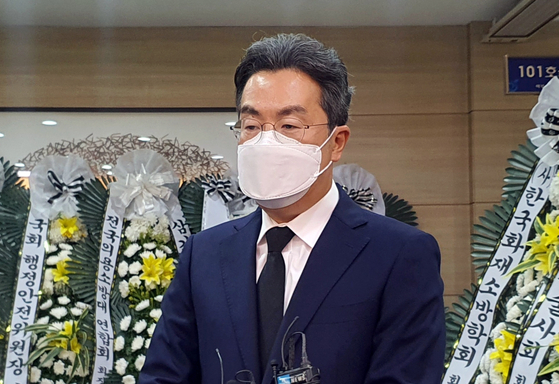 Gyeonggi Province plans to hold a funeral for Kim Monday morning to honor his sacrifice in the line of duty.

President Moon Jae-in on Saturday expressed his condolences to Kim’s family, and vowed to make sure such a tragedy is not repeated, said Blue House spokesperson Park Kyung-mee in a written briefing.

Two days after apologizing for the fire on Friday, Kang from Coupang Corp., again, apologized and sent condolences to the bereaved on Sunday, promising to “come up with specific plans to support the bereaved through their lifetime.”

Kim is survived by a wife and a daughter and son in their 20s.

Kang said Coupang will create a fund to support the children of firefighters that died in the line of duty.

Kang added that the Deokpyeong Logistics Center had gone through an inspection by a private company that checked whether it had proper fire-fighting equipment and whether employees had held fire drills.

But some Coupang employees are angry over the fire at the warehouse.

They say Coupang did not safely manage it, with lots of dust piled up and electrical devices running at the facility.

Coupang announced Kim Bom’s resignation as chairman of the board and as a registered director of Coupang Corp. on the same day the fire broke out, though the decision was made a week earlier.

“I’m not just making an issue out of this latest fire outbreak,” wrote a commenter on Twitter. “There have been a number of problems at Coupang, but nothing has been improved, and it can no longer be overlooked.”

Last year, Coupang was blamed for not informing its employees when a worker at its warehouse in Bucheon, Gyeonggi, was confirmed to have contracted Covid-19. That resulted in a cluster of infections.

Coupang bought the Deokpyeong Logistics Center in 2016 for 140 billion won ($125 million), according to a local media outlet. It was used to service customers in southeastern Seoul, Gyeonggi and Chungcheong Province.