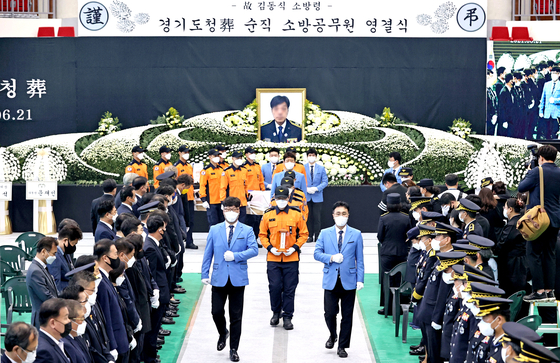 A funeral for firefighter Kim Dong-shik takes place in Gwnagju, Gyeonggi, on Monday. Kim died while putting out a fire at a Coupang warehouse in Icheon, Gyeonggi. [NEWS1]


The sprinklers in Coupang’s warehouse in Icheon, Gyeonggi, may not have been working in the first eight minutes of a fire that broke out Thursday morning and destroyed the building, killing one fireman.

“We’ll get to know after the final results are out, but at this point, activation of sprinklers was seen to have been delayed for eight minutes, according to findings by the fire authorities,” said Lee Sang-kyu, a spokesperson for Gyeonggi-do Fire Services, on Sunday.

The sprinklers may have been turned off intentionally due to frequent malfunctions.

"On principle, [sprinklers] should not be turned off," said Lee. But the sprinklers "seem to have been turned off for around eight minutes."

The possibility of the sprinklers having been shut off was raised by a transportation union under the Korean Confederation of Trade Unions that represents Coupang workers on Friday. Police are looking into that.

The union said sprinklers were shut off in the warehouse to prevent accidental activation, which could damage products and packaging at the warehouse.

Coupang has merely said that the sprinklers were working upon the arrival of firefighters to the Deokpyeong Logistics Center in Icheon on Thursday.

The fire appears to have been ignited by a spark from a power outlet on the second basement level of the facility.

A 52-year-old firefighter named Kim Dong-shik died after entering the building on Thursday.

The fire was under control but not yet fully extinguished as of the press time Monday.

On top of a promise made Sunday to support Kim's wife, son and daughter through their lifetimes, Coupang on Monday announced it would compensate people living near the Icheon warehouse if they suffered damages from the fire.

On Monday, the e-commerce company said the resignation of Coupang founder Kim Bom from the company's board, of which he was chairman, was decided ahead of the fire's outbreak.

Kim has been criticized for resigning after the fire broke out, and accused of trying to evade responsibility.

Kim resigned on May 31, the company said Monday. But the announcement of his resignation was made on June 17, the day the fire broke out.

To help out the family of the slain fireman, oil refiner S-Oil announced it was giving them 30 million won ($27,000).

The firefighter is survived by a wife and a daughter and son in their 20s.