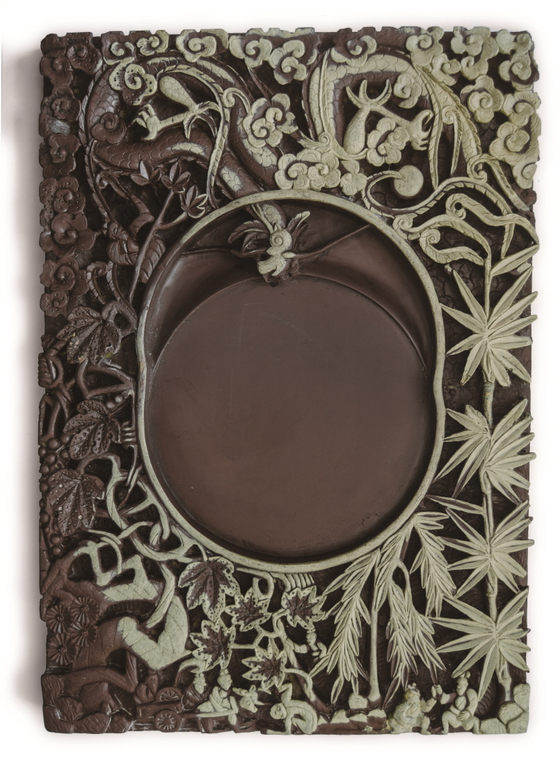 
Italian sculptor Michelangelo (1475-1564) once said, "Every block of stone has a statue inside it, and it is the task of the sculptor to discover it."

Lee Keun-bae, a poet and the president of National Academy of Arts, says Korean artisans of Joseon Dynasty (1392-1910), who hand-crafted and sculpted different patterns and designs on inkstones would've felt the same.

"The level of technique and artistry is beyond expression, indeed reaching the realm of godliness," Lee said.

The 81-year-old poet who has won numerous Spring literary contests, is also an avid collector of inkstones. Over nearly four decades, Lee has collected more than one thousand inkstones, "probably the most and of best quality," said Kim Hyung-kook, chairman of the board of the Gana Foundation for Arts and Culture. 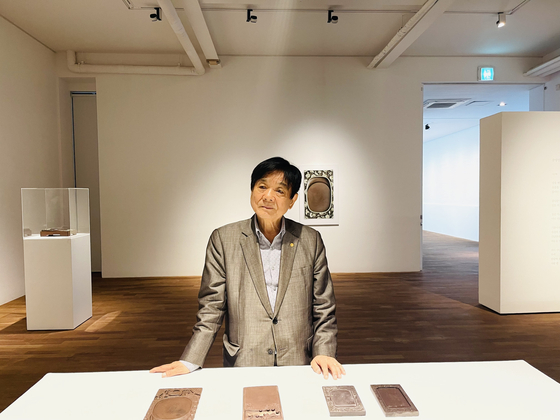 Lee Keun-bae, a poet and an avid collector of old inkstones, showcases his vast collection at the Gana Art Center in central Seoul. [YIM SEUNG-HYE]


To celebrate the 60th anniversary of Lee's debut as a poet, the Gana Foundation organized an exhibition showcasing masterpiece inkstones from Lee's collection. Lee began collecting inkstones in 1973 and has written about 80 poems inspired by the "beautiful Korean inkstones."

"We have carefully selected about 100 Korean inkstones in Lee's vast collection to showcase the beauty of our cultural artifacts," Kim said, adding that the artifacts should have received the spotlight and recognition long ago.

The exhibit kicked off June 16 for a nine-day run at the Gana Art Center in Jongno district, central Seoul. It is titled "Yongbieocheonga of Inkstones Sung by the Sun and the Moon," sharing the title of one of Lee's inkstone-inspired poems. Yongbieocheonga is Korea's first musical text eulogizing the founding of the Joseon Dynasty, and the first text ever in hangul, the Korean writing system.

"I believe inkstones showcase the quintessential beauty of Asia," said Lee. "It wasn't a mere writing tool but a valuable 'being' for many Joseon artists. It inspired and allowed Joseon artists like Kim Jeong-hui to paint 'Sehando,' a masterpiece that's now become a national treasure."

"It is said that Joseon scholars ritually washed their inkstones every morning, even if they didn't wash their own faces," Lee said. "They were one of the treasured writing tools in Joseon's royal palace and also a special royal gift presented to important guests." 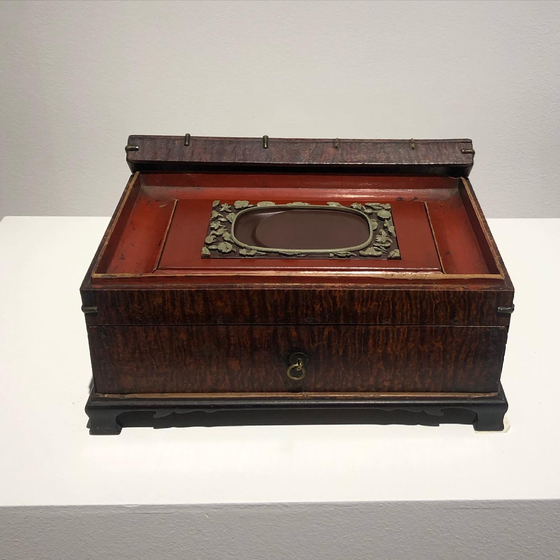 Inkstones were treasured in Joseon Dynasty that they were usually kept safely inside wooden chests. [YIM SEUNG-HYE]


Why was it so difficult to see such a large collection of Korean inkstones?

During the Japanese invasions of Korea in 1592, many royal items, including royal inkstones were taken to Japan, some destroyed and buried with the deceased. Lee explained that there are hardly any inkstones made in Japan because it's a volcanic country, and Japanese would have coveted Korean inkstones.

The inkstones exhibited here were used by the royal family in the early Joseon Dynasty, some bestowed on public officials for the founding of the country, or presented to foreign envoys. But Lee says after the Japanese invasion, these exquisite inkstones were no longer created. 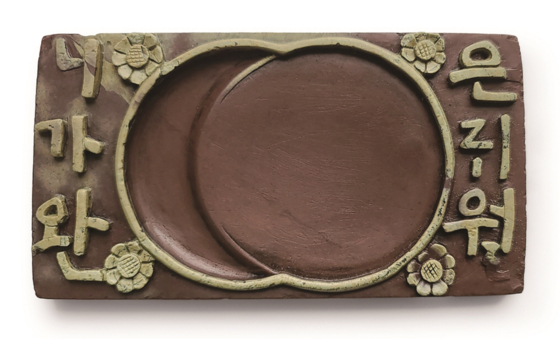 Wiwonhwachoseok inkstone named "Eundaewon Myeongilwolyeon" has a unique design of Korean alphabet hangul sculpted on it. [GANA FOUNDATION FOR ARTS AND CULTURE]

Wiwonhwachoseok is a type of rock found in Wiwon River, which is currently in North Korea. It has two different colored layers -- darkish red, known as adzuki bean color, and a green called a mung bean color. [YIM SEUNG-HYE]


The poet said, "while other people purchased Lee Jung-seop's paintings for 300,000 won ($265) a piece, I spent about one million won to purchase one inkstone. If I were crazy about paintings and used my fortune to collect them, I would be sitting on a pile of money now, but these inkstones wouldn't have made it safely back to Korea. I still don't have any intention to trade my inkstones for anything else even if they are Hyewon Sin Yun-bok, Danwon Kim Hong-do or Lee Jung-seop paintings."

"The best rocks to create instones are those found under clear waters, but because there are no such rocks nor sophisticated craftsmen as in Korea, not only inkstones but the artisans were taken to Japan," Lee said. "Nearly all my life, I have searched around for Korean inkstones and purchased them, mostly in other countries, and brought them back to Korea."

The inkstones on display are Lee's top choices in terms of quality and aesthetics. About 60 percent are Wiwonhwachoseok inkstones, which are inkstones made using rocks found in the Wiwon River, which is currently in North Korea, Chagang Province. The rocks there are known for a unique combination of green and darkish red colors. The rest are Nampo inkstones, a type of inkstones made using rocks near Mount Seongju in Nampo in Boryeong City, South Chungcheong.

Growing up, Lee said he was familiar with Nampo inkstones, which his grandfather had treasured at home. Then during a 1973 visit to an exhibit of inkstones at the Changdeok Palace, the poet became mesmerized by them. He had thought of them as just beautiful writing tools until then.

Lee has earned a nickname "yeonbeokmukchi," which in common parlance meaning "an inkstone wacko" for being obsessed with finding inkstones with exquisite designs. As he collected more and more inkstones, Lee says he fell in love with the sophisticated designs sculpted on Wiwonhwachoseok inkstones.

"Just look at that sophisticated details, depicting the details on the leaves of a grapevine," Lee said. Some inkstone designs even show vine leaves damaged by pests.

The mystic hue of green on the surface of the inkstones suggests painting by artisans. But it's a typical feature of Wiwonhwachoseok. The rock has two different colored layers -- darkish red, known as adzuki bean color, and a green called a mung bean color. After making the rock into a rectangular block, the artisans sand the surface until the green layer appears. They then sculpt patterns and designs on the stones.

The first book on Korean inkstones was written by Yoshida Kinshu, a Japanese author, in 1974. The writer only published 50 copies of the book, handwriting them on hanji Korean traditional paper. Lee has one copy of the book.

"The Japanese writer also describes in the book that Wiwonhwachoseok inkstones are the most sophisticated inkstones he's ever seen and that only those artisans who have reached the realm of godliness can create something like this," Lee said.

Lee has a vast collection of Nampo inkstones as well. Joseon scholar Dasan Jeong Yak-yong (1762-1836) believed this type is the best. Lee's favorite Nampo inkstone is Jeongjodaewangsaeunyeon, an inkstone bestowed by King Jeongjo to Nam Yu-yong, who was a teacher of both him and his father Yeongjo, more commonly known as Crown Prince Sado. 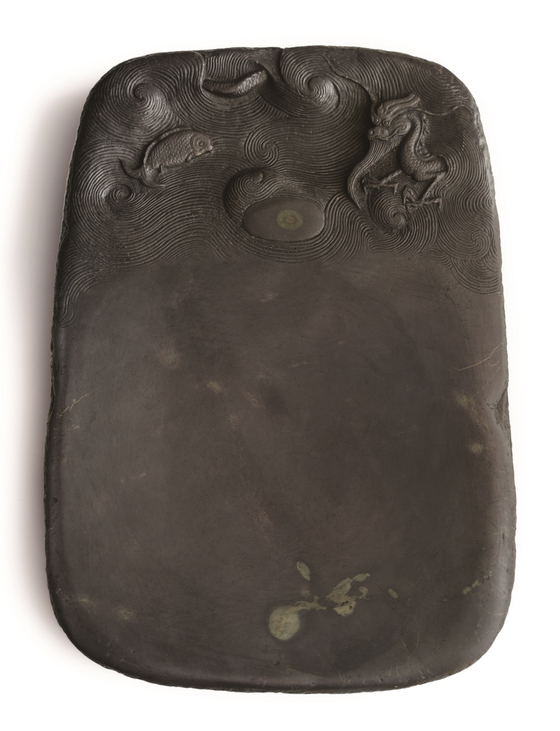 "Jeongjodaewangsaeunyeon," an inkstone bestowed by King Jeongjo to Nam Yu-yong, who was a teacher of both him and his father Yeongjo, more commonly known as Crown Prince Sado. [GANA FOUNDATION FOR ARTS AND CULTURE]


"Inkstones are not only an important tool for me as a poet, but an inspiration and a 'being' that I can dedicate my life to," the poet said. "Compared to Chinese inkstones, Korean inkstones have freely expressed patterns but at the same time have that beauty that comes from simplicity. I think old Korean inkstones are Korea's proud artifacts as much as white porcelains.”

"The word 'Inkstone' has become so distant to us in today's digitalized era, where people don't even use pen and paper as much as before," said Kim from the Gana Foundation for Arts and Culture. "We hope visitors to the exhibit take this opportunity to think about how inkstones used to be an indispensable writing tool back in the day and how such beautiful artifacts would have nearly disappeared had it not been for Lee's passion."

Simmering close to a boil