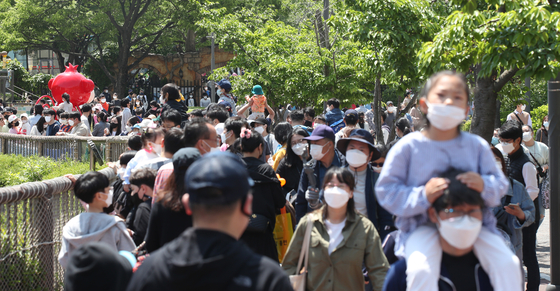 
The ruling Democratic Party (DP) is pushing legislation to designate weekday holidays for all public holidays that fall on weekends, and some like the idea while others don't.

According to a survey of 1,012 members of the general public by polling organization T Bridge Corporation, 72.5 percent of respondents agreed with the idea of alternative holidays for all public holidays. Another poll of 4,005 people by jobs website Saramin showed that 89.1 percent said the same.

The DP hopes to pass the pending bill in the National Assembly during the provisional June parliamentary session. This year, National Liberation Day, National Foundation Day, Hangul Day and Christmas all fall on Saturday or Sunday.

The bill is expected to easily pass, as both the ruling and opposition parties support it. People Power Party (PPP) floor spokesperson Kang Min-kuk said, “There is no reason to oppose” the bill.

“Developed countries designate more holidays during economic recessions, aiming to increase domestic consumption and add jobs,” said Kwon Tae-il, a researcher at the Korea Culture & Tourism Institute. “Not only does it drive consumption in travel and shopping, but it has an even bigger economic effect considering that taking a day off improves labor productivity and social benefits.”

Although many in the services sector will benefit, manufacturers are less keen on giving workers more days off.

In 2013, when the government was trying to pass the same bill for three major holidays – Chuseok, Lunar New Year and Children’s Day - the Korea Enterprises Federation (KEF) stated that companies would lose 9.8 trillion won per alternative holiday if the bill was passed. Production yields would drop 28-trillion-won per year because many factories would be unable to operate during the additional holidays, it said. Companies that continue production on holidays will have to spend an extra 4.2 trillion won per year on overtime.

“Anti-market policies such as reducing working hours and increasing the minimum wage, paired with struggles from the Covid-19 pandemic, took a toll on businesses,” said Jang Jung-woo, a labor policy head at the KEF. "Having alternative holidays could actually curb employment."

The crux of the matter is that while more holidays might be good for the economy, they can be bad for individual businesses.

“Similar to Korea’s income-led growth model, designating alternative holidays is ‘holiday-led growth,’ which assumes that there’s bound to be an increase in domestic consumption with more days off,” said Kim Du-ol, an economics professor at Myongji University.

“There are industries that can earn more during holidays, but there are also some that can’t. It’s questionable whether the ruling party considered the suffering industries while calculating the overall economic effect.”

Sometimes the end of the road is selling the farm