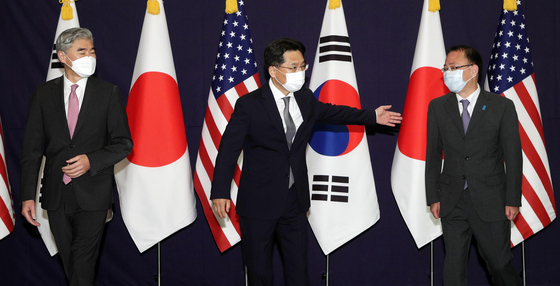 
The United States hopes that North Korea will respond positively to its offer “to meet anywhere, anytime, without preconditions,” its nuclear envoy said Monday in Seoul.

“Our policy calls for a calibrated, practical approach that is open to and will explore diplomacy with the DPRK,” said Kim at the beginning of the meeting.

“As we seek to make practical progress that increases the security of the United States and our allies, we continue to hope that the DPRK will respond positively to our outreach and our offer to meet anywhere, anytime, without preconditions.”

Kim was using the acronym for the North's official name, the Democratic People's Republic of Korea.

However, Kim was quick to stress that Washington will enforce United Nations Security Council sanctions resolutions on Pyongyang to counter any threats.

Kim urged all UN member states and Security Council members to “address the threat posed to the international community by the DPRK.”

Referring to his decades of negotiating with Pyongyang, Kim stressed that “coordination is essential to achieving our shared goals.”

In a plenary meeting of the ruling Workers’ Party's Central Committee last Thursday, North Korean leader Kim Jong-un said he would prepare for either dialogue or confrontation — "especially to get fully prepared for confrontation” — just ahead of the new American nuclear negotiator’s visit to Seoul. Thus, there was interest in what sort of message the Joe Biden administration would send.

“The DPRK also announced the conclusion of their important political meeting last week,” said Noh. “At this critical juncture, this meeting to strengthen the coordination among our three governments and find practical ways to make substantial progress is very timely and will be instrumental to achieving our mutual goal sooner than later.”

Noh said that  South Korean and Japanese leaders welcome the Biden administration's recent review of North Korea policy, which is “open to and will explore diplomacy.”

He said that the three countries through close consultations “revisited the past efforts and reflected on the lessons learned” and “explored ways to make substantial progress” towards “complete denuclearization and establishment of permanent peace on the Korean Peninsula.”

Funakoshi said the three countries’ trilateral cooperation “is of capital importance for peace and stability in the region.”

He added the three countries’ foreign ministers had a “very good trilateral meeting last month in London soon after the completion of the U.S. policy review for North Korea,” stressing the “responsibility as senior diplomats” to follow-up on such discussions.

Seoul’s Ministry of Foreign Affairs said in a statement after the trilateral discussions that the three nuclear envoys appreciated “the close coordination of the three countries throughout U.S. policy review process" on North Korea after the launch of the Biden administration.

They also agreed to "continue cooperation for the early resumption of dialogue with the DPRK to make substantive progress in the complete denuclearization and the establishment of permanent peace on the Korean Peninsula."

“We took note of Chairman Kim's recent statement, referring to both dialogue and confrontation,” Kim said at the beginning of the meeting. “We will be prepared for either because [...] we are still waiting to hear back from Pyongyang our proposal for a meeting. And hopefully Chairman Kim's reference to dialogue indicates that we will get a positive response soon.”

He added that he “reiterated our support for meaningful inter-Korean dialogue, cooperation and engagement as our two leaders did in Washington, when President Moon [Jae-in] visited Washington," referring to a summit between the South Korean and U.S. presidents on May 21.

South Korea “will continue to play a necessary role for the early resumption of dialogue” with the North, Noh told Kim.

He added, “We wish to restore the structure where inter-Korean and U.S.-DPRK relations reinforce each other in a mutually beneficial way.”

Noh held bilateral talks with his Japanese counterpart in the afternoon, which he said would focus on managing stability on the Korean Peninsula and the region. He also expressed hopes for a “successful” Tokyo Olympic Games next month.

Seoul’s Foreign Minister Chung Eui-yong also met with Kim and NSC’s Pak and asked them to “make effort toward substantive progress toward the Korean Peninsula peace process under seamless coordination between South Korea and the United States,” said his Foreign Ministry in a statement.

Kim replied that Seoul and Washington will continue to work closely together to guide North Korea back to the dialogue table based on the “fully coordinated policy” between the two countries, according to the ministry.

The Biden administration has been encouraging its East Asian allies to get along better.

White House National Security Adviser Jake Sullivan in an interview with ABC News Sunday called North Korean leader Kim's comments on dialogue and confrontation an “interesting signal” as Washington is waiting for Pyongyang to send a clear message as to “whether they are prepared to sit down at the table.”

He continued, “And we will wait to see whether they are followed up with any kind of more direct communication to us about a potential path forward.”

Such a signal could be a “yes” from North Korea to “sit down and begin negotiations.”

Sullivan noted that as with the Iranian nuclear issue, “with the North Korean nuclear issue, there's no substitute for diplomacy to begin to make progress towards that ultimate objective — the complete denuclearization of the Korean Peninsula.”

Sung Kim, a veteran diplomat who doubles as the U.S. ambassador to Indonesia, kicked off a five-day trip to Seoul Saturday, his first visit here since he took his new post as nuclear envoy on May 21. Kim, a former U.S. ambassador to Seoul, has experience negotiating with Pyongyang across several administrations.

Kim will meet with Seoul's Unification Minister Lee In-young Tuesday as well as members of academia and civil society. 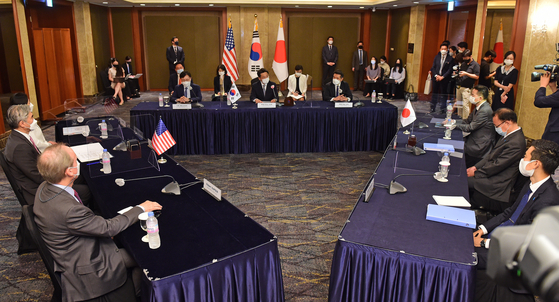