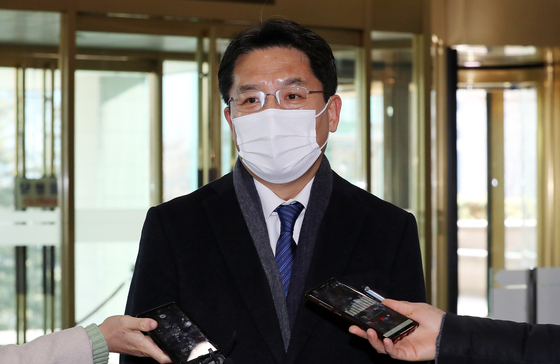 Noh Kyu-duk, the new special representative for Korean Peninsula peace and security affairs, speaks to reporters on the first day of his new job Monday at the Foreign Ministry in central Seoul. [NEWS1]


Noh Kyu-duk, a career diplomat serving as a presidential aide, was named Seoul’s new chief nuclear envoy Monday amid a transition in the U.S. administration expected to introduce a new team of negotiators for North Korea denuclearization talks.

The Ministry of Foreign Affairs announced that Noh, the presidential secretary for peace planning in the Blue House National Security Office (NSO), was appointed as the special representative for Korean Peninsula peace and security affairs, replacing Lee Do-hoon.

Noh previously served as a presidential secretary for security strategy in the NSO and as a Foreign Ministry spokesman. He has also served as director-general at the Foreign Ministry's Korean Peninsula Peace Regime Bureau and as an ambassador to Nigeria.

Noh received a bachelor's degree in communication from Seoul National University and joined the Foreign Ministry in 1987 after passing the diplomatic service exam.

His appointment comes as the administration of U.S. President-elect Joe Biden is set to replace the outgoing Trump government on Jan. 20. Seoul is also preparing a new team for denuclearization talks with North Korea and strategizing to bring Pyongyang back to the dialogue table in coordination with Washington’s new team of negotiators.

The Moon Jae-in administration has pushed for a Korean Peninsula peace process. Those efforts have stalled since last year, despite three meetings between North Korean leader Kim Jong-un and U.S. President Donald Trump between 2018 and 2019.

“The various conditions surrounding the Korean Peninsula are fluid in many ways, and I feel a tremendous sense of responsibility taking on this important task at this juncture,” Noh told reporters Monday on his first day of the new job. “Representatives from related countries, including those from the Biden administration soon set to launch, should establish close relations for dialogue. I will do my utmost to enable meaningful progress in the the Moon Jae-in government’s Korean Peninsula peace process." 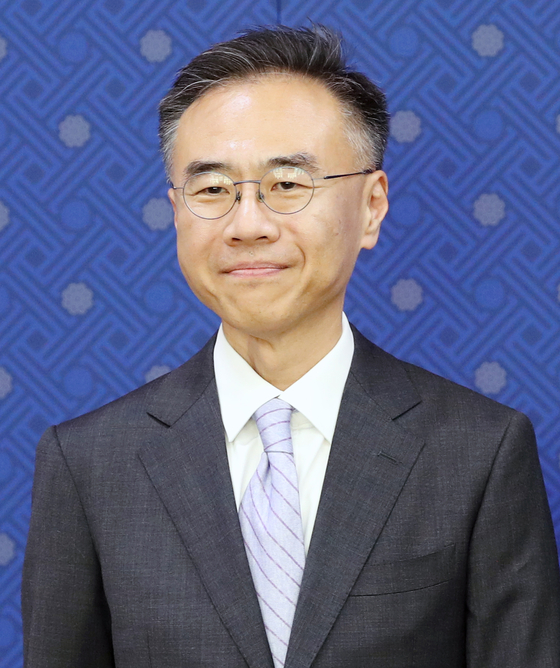 Kim, who joined the Foreign Ministry in 1992, previously served as deputy director-general at the ministry’s North American Affairs Bureau and a director-general for foreign and national security policy.

Both Noh and Kim are seen to be well-versed in multilateral diplomacy, with experience serving at the Korean mission to the United Nations in New York as well as the Korean Embassy to the United States.

Lee was appointed as special representative on Korean Peninsula affairs in September 2017 and has become the longest-serving chief nuclear envoy, holding the position for three years and three months.

He told reporters Monday, “I have some regrets, as we worked hard for the denuclearization and establishment of peace on the Korean Peninsula through cooperation between South Korea and the United States, but I think I did the best I could under the given circumstances.”

Over the years, Lee had worked closely with U.S. Deputy Secretary of State Stephen Biegun, who doubled as Washington’s special representative for North Korea, to coordinate on Pyongyang policy. The two launched the working group talks in November 2018 as an advisory body to coordinate policy on North Korean denuclearization, sanctions enforcement and inter-Korean cooperation, and held frequent talks over the years.

Biegun made his final visit to Seoul in his current post last week and similarly expressed in a speech at a local think tank Thursday that he was “disappointed” at not having accomplished more to advance denuclearization negotiations. However, he encouraged “sustained engagement” with North Korea in the next U.S. administration.

In a 2018 New York Times op-ed piece, President-elect Biden’s nominee for secretary of state, Antony Blinken, had urged Trump to stick to the 2015 Iran nuclear deal and apply its “basic template to North Korea.”

Blinken suggested negotiating an interim deal that freezes Pyongyang’s program and starts a rollback, gets inspectors on the ground and “offers modest, carefully measured economic relief.” He then urged to use “the resulting time to produce a more comprehensive agreement, ideally to include denuclearization and a peace treaty.”