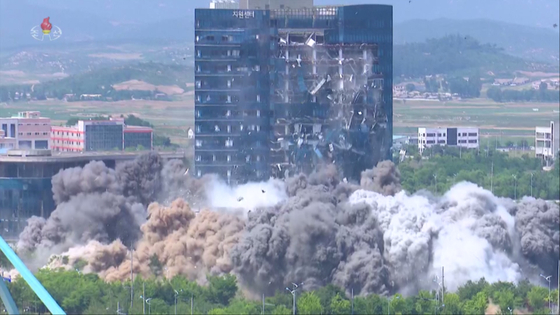 The destruction of the Inter-Korean Liaison Office in Kaesong in June 2020. [KCNA]


South Korea's state-run electric company supplied power to Kaesong in North Korea for several months after all South Korean personnel withdrew from an industrial complex in January 2020, according to documents obtained by the JoongAng Ilbo on Monday.

The documents from the Korea Electric Power Corporation (Kepco), which were given to the newspaper by People Power Party (PPP) lawmaker Yoon Young-seok’s office, show that electricity to the city was not cut off after the withdrawal — raising questions as to whether power was supplied even after North Korea blew up the Inter-Korean Liaison Office last June.

Kepco supplied a total of 898 megawatts of electricity to the Kaesong Industrial Complex between January and June 2020. According to Kepco, South Korean electricity was used in 14 places in Kaesong during this period, including four industrial sites, one residence, and nine commercial facilities.

Kepco’s analysis is that the power was used by the Inter-Korean Liaison Office and its support facilities, as well as drainage systems, waste disposal sites, restaurants, a fire station and living accommodations.

Among them, electricity sent to a water maintenance plant is believed to have been used to purify and supply 15,000 tons of water a day for North Koreans living in Kaesong.

This is the first time that figures about electricity usage and where power was consumed have been confirmed.

Questions abound about why power was supplied to Kaesong after all South Koreans left in January 2020. Electricity for the industrial zone is entirely underwritten by the South.

The average monthly consumption of electricity in Kaesong supplied by Kepco was approximately 150 megawatts — enough to power 640 households in Seoul for a month.

According to Yoon, the fault for the situation does not lie entirely with Kepco. “As a public corporation, Kepco cannot make decisions about supplying power to the North by itself,” he said. He added that the government “must make it clear why the North was allowed to continue using South Korean power — especially when it can be diverted for other purposes — and also if there are other instances of electricity being supplied to the North.”

Although the government announced that all power to Kaesong would be cut off after the North’s blowing up of the Inter-Korean Liaison Office last June, documents show that 50 megawatts were supplied in July, followed by 904 megawatts last November.

The use of electricity coincided with Voice of America (VoA) reports last November that satellite imagery captured increased personnel and vehicle movements around 12 sites in the complex.

Kepco is adamant, however, that no electricity was supplied after June, and that the recorded electricity usage in November was merely for “internal accounting purposes.”

In response to that explanation, one electrical engineering expert who spoke on the condition of anonymity said that the true amount of power supplied to Kaesong after June can be determined by examining a log at the local load distributing center.

He added, “If Kepco says it cannot measure how much power was supplied to Kaesong, it means the government is not properly managing electricity use in the Kaesong Industrial Complex.”