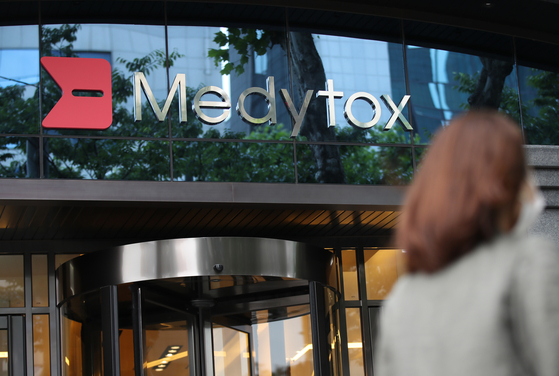 Medytox will receive a 20 percent stake in Aeon Biopharma and 15 years of royalty fees in exchange for granting a license for its botulinum toxin technology.

The settlement is part of a years-long feud between Medytox and Daewoong Pharmaceutical — two of the top three Korean manufacturers of botulinum toxin, more commonly known as "Botox." The substance is widely used by beauty surgeons to reduce wrinkles.

Medytox has accused Daewoong of stealing bacterial strains and production methods for Nabota, Daewoong’s botulinum toxin product, since its launch in 2014. For the past five years, the two companies have been fighting in U.S. and Korean courts.

In the United States, a significant ruling was made in December when the International Trade Commission (ITC) acknowledged Daewoong’s misappropriation of Medytox’s production methods and banned imports of Nabota — sold as “Jeauveau” in the United States — for 21 months.

Daewoong’s other partner, Evolus, is the global distributor of Nabota for aesthetic use and had already reached a similar agreement with Medytox in February. In exchange, the Korean company was offered billions of dollars in license fees and 16.7 percent of Evolus’ share.

According to Medytox, the U.S. market for botulinum toxin is divided 50-50 by therapeutic and aesthetic purposes.

“We have now resolved legal disputes with the two companies that hold commercialization rights for Daewoong’s botulinum toxin product in overseas markets,” said Medytox CEO Jung Hyun-ho in a Tuesday statement, adding the company has “fully achieved its goal” in the United States.

In May, Medytox filed two lawsuits against Aeon Biopharma in a California court. The U.S. company was conducting clinical trials of ABP-450 at the time and Medytox claimed Aeon would have to pay if it wants to sell a product based on Medytox’s technology.

Both legal charges will be dropped as a result of the settlement, Medytox said.

The Korean company added the ITC’s ban on Nabota will likely be nullified, as it has come to terms with both U.S. importers of the product.

In exchange, Aeon has agreed to pay Medytox royalty fees for 15 years and issue 26.7 million common shares, equivalent to around 20 percent of the unlisted U.S. company.

Medytox and Aeon Biopharma’s agreement did not involve Daewoong Pharmaceutical. Nonetheless, the deal benefits Nabota’s original manufacturer as it cleared all legal obstacles standing in the way of it expanding overseas sales. Nabota has been approved to launch sales in 55 countries so far.

However, Medytox and Daewoong’s botox war grinds on as the two still have suits pending at Korean courts.

Daewoong has constantly denied allegations it stole trade secrets and said it will continue to prove its innocence in domestic courts.

“Our analysis is that Medytox hurriedly settled with Aeon out of concern that the lawsuit would be dismissed by the California court,” said Daewoong Pharmaceutical in a statement, Wednesday.

Regarding its U.S. partner’s decision, the company said Aeon Biopharma was preparing for a public listing on the stock market and the settlement was a strategic decision to eliminate risks.

“We will achieve a final victory against Medytox’s false claims that we misappropriated trade secrets,” it said.