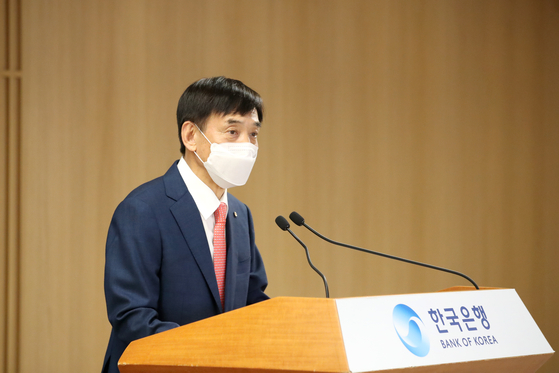 Bank of Korea Gov. Lee Ju-yeol speaks during an online press briefing held Tuesday. During the briefing he hinted of a rate hike ″within this year.″ [BANK OF KOREA]

Bank of Korea Gov. Lee Ju-yeol hinted at the need to raise interest rates within this year.

While Lee has been sending signals over the past couple of months of a potential rate hike, it is the first time he specified “within this year.”

“We have announced our policy direction to normalize currently expansionary monetary policies within this year,” Lee said during an online briefing held Thursday.

Asked if the central bank has decided to speed up a rate hike, Lee said “I’ve been thinking of the need to raise rates within this year even as I was giving the commemoration speech for the bank’s [71st] anniversary [earlier this month,] though I didn’t realize I hadn’t actually mentioned ‘this year’ until today.”

During the commemoration speech on June 11, Lee said, “We should normalize currently expansionary monetary policy from an appropriate time in the future in an orderly manner.”

Analysts took this comment as a strong hint of a rate hike, but Lee did not specify a timeline before Thursday.

Lee said the current record low base rate of 0.5 percent was set because the country’s economy faced the possibility of significant contraction as a result of the coronavirus pandemic. It is right for the central bank to change its policies as the macroeconomic situation changes, he said.

Lee added that even with a hike in the key interest rate, he would consider monetary policy to be quite expansionary.

One major concern for the central bank is increasing inflation.

Lee mentioned that the central bank is very aware of the growth of household debt and asset prices and will keep them in mind while setting monetary policies.

On whether a supplementary budget and coronavirus relief payments by the government contradicts a policy to raise interest rates and cool the economy, Lee said monetary policy and fiscal policy do not have to move in the same direction and can actually complement each other by taking different directions sometimes.

“Normalizing interest rates could be a big burden to some groups in the Korean economy such as self-employed people and small businesses,” he said. “The supplementary budget could cover these difficulties, in which case, [the expansionary] fiscal policies can actually help normalize monetary policies.”