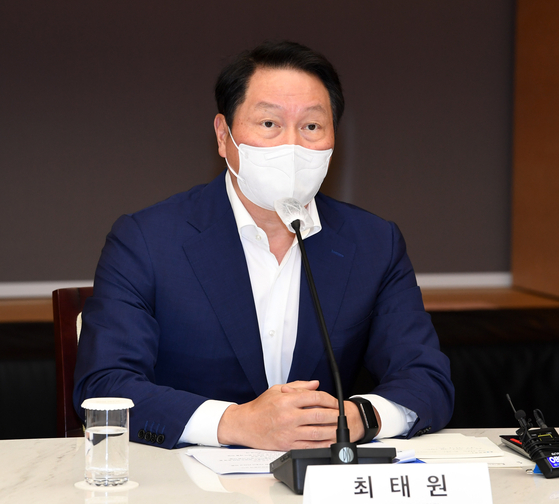 Chey Tae-won, head of the Korea Chamber of Commerce and Industry, speaks at the office of the organization in central Seoul on June 3. [JOONGANG PHOTO]


A major business lobbying group called on legislators to pass a raft of pending bills aimed at lifting regulations on new technologies and services including drones and telemedicine.

The Korea Chamber of Commerce and Industry (KCCI) listed over 20 bills that are considered essential to legislate high-tech services. Of them, the association highlighted a law designed to classify the medical and education sectors as service business so that new services like telemedicine would be subject to less regulatory hurdles.

Still, some civic groups voiced concerns that the law could pave the way for the privatization of the healthcare industry, which would raise medical costs.

“The service industry has great potential to generate a lot of jobs,” said Park Jung-soo, a researcher at the Korea Institute for Industrial Economics and Trade, in a statement released by the KCCI. “As the government has advocated for growth in the service industry, the law should be discussed during the special legislative session to make progress."

The lobbying group also supported an amendment to the Electronic Financial Transactions Act to lower the minimum capital required to operate a digital payment business.

The reform bill was proposed last November, but has sat idle since then.

“Competing countries have already revised related rules and regulations after spotting the potential in the fintech area,” said Ryu Young-joon, head of the Korea Fintech Industry Association and CEO of Kakao Pay.

“If we are not to miss out on an opportune time, we should swiftly amend the law."

Other pending bills include an amendment to simplify the application procedure for flying drones and a bill aimed at permitting the online sale of glass and plastic lenses.

The KCCI, however, acknowledged that there has been an improvement in deregulation, after the government adopted a regulatory sandbox system.

A regulatory sandbox allows new businesses or technologies to be exempted from related regulations for a minimum of two years to encourage innovation.

A bill to legalize shared kitchen services was passed last December, while that for reusing electric vehicle batteries got the nod the same month.

To spearhead the introduction of new services, the lawmakers could preemptively draft a bill to ease existing regulations if the pilot businesses allowed under the sandbox system did not encounter any serious concerns.

“Even if some projects are in the process of undergoing the sandbox system, the lawmakers can start discussions as to how they legalize them if the projects proved to be safe,” said Kang Min-jae, head of the sandbox management division at the KCCI.