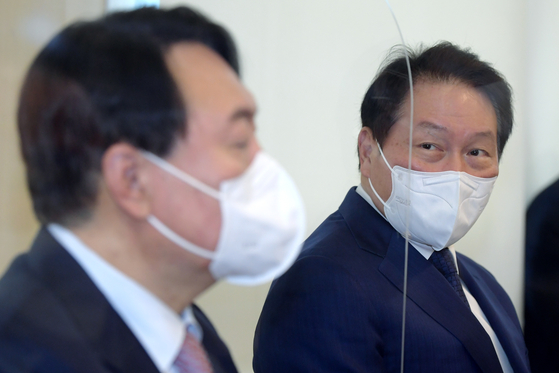 
Chey Tae-won, head of the Korea Chamber of Commerce and Industry (KCCI), stressed the need for eased regulations and more investment in infrastructure and high technologies during a meeting with Yoon Suk-yeol, the presidential candidate from the main opposition People Power Party (PPP) on Thursday.

"The economic world awaits good solutions to arise for the betterment of the economy through the upcoming presidential election," Chey said, welcoming Yoon to the KCCI meeting held in central Seoul.

"There are grave issues at hand, global ones such as the U.S.-China rivalry and the supply chain bottleneck, as well as local ones such as low birth rate, low growth rate and going carbon neutral. Recovering exports are leading the Korean economy, but the prolonged Covid-19 pandemic is expected to hit households through next year."

"We ask for a reinforcement of investment in future industries infrastructure," Chey said, mentioning the internet of things (IoT) and artificial intelligence (AI) as examples of future technologies that the government should be eyeing.

He also asked that the government regulations be changed from the current "positive" structure to "negative" to maximize flexibility and freedom for local companies.

"The overall framework of law must be changed so that innovate business can take place in the market," Chey said.

He added that economic security, a term he used to describe Korea's economic ability to survive international crisis, is just as important as national defense, asking Yoon to "think about the roles that companies can play in legislation or global partnerships to ensure economic security."

"I believe that making new jobs should be left to the liberties of the private sector, which can do so through its growth," Yoon said. "I will do my best to make sure that businessmen do not feel like they’re being harmed."

"We're not asking for no regulation at all," Chey said to Lee. "Regulations need to take place where they are necessary. What we ask is that they take place in the direction that helps increase growth potential."

Lee promised to change the regulations from positive to negative, although he maintained that regulations "are not only bad."

"If regulations prohibit the evils of monopoly or the inefficiencies within the market, then they need to be expanded," Lee said. "However, bureaucratic regulations that hinder creativity and innovation need to be minimized."