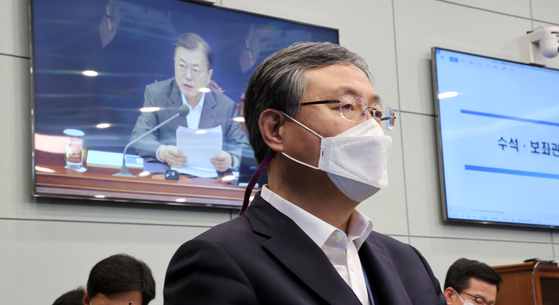 
The Ministry of Justice offered an olive branch to the prosecution on Monday by allowing prosecutors investigating politically volatile cases to retain their posts in the latest reshuffle.

Since new Minister Park Beom-kye took office on Jan. 28, the ministry has been carrying out a series of reshuffles of the prosecution. His first reshuffle of top prosecutors, announced on Feb. 7, however, invited strong repercussion as Park ignored the opinions of Prosecutor General Yoon Seok-youl and Senior Presidential Secretary for Civil Affairs Shin Hyun-soo.

Park's first reshuffle forced the Blue House to admit that the administration's top players in charge of the criminal justice system were having a serious discord. According to the Blue House, the prosecution and the ministry had different opinions, and Shin tried to mediate their differences. Park, however, announced the reshuffle in the middle of Shin's mediation attempt, triggering the frustrated presidential aide to tell Moon that he wants to step down, just six weeks into his job.

Although Moon tried to persuade him otherwise, Shin took a two-day leave starting Thursday. He then returned to the Blue House on Monday and said he will do his best to perform his duty, effectively withdrawing his resignation.

Later in the day, the Justice Ministry announced the small-scale reshuffle of the prosecution, and Shin attended the senior secretariat meeting as scheduled.

Before the Legislation and Judiciary Committee of the National Assembly, Park said Monday that he consulted with Shin about the latest reshuffle of the mid-level prosecutors. "From my perspective, I think we had enough communication," Park said.

Asked by an opposition lawmaker if he had personally met with Shin to discuss the reshuffle, Park said, "I cannot reveal the specific channel. But I think there was enough communication with the Blue House and [Yoon's] Supreme Prosecutors' Office."

One of the many who avoided reassignments was Byeon Pil-geon, head of the Criminal Department 1 of the Seoul Central District Prosecutors' Office. Speculations were high that Byeon would be assigned to a different job because he had disagreed with his boss, Lee Sung-yoon, over the office's controversial probe into a key associate of Prosecutor General Yoon.

Lee urged forward an investigation into suspected collusion between a reporter and Han Dong-hoon, a senior prosecutor and ally of Yoon, to blackmail a witness. Byeon, however, recently cleared Han, despite Lee's repeated push to go after him.

The Justice Ministry also excluded a team of prosecutors investigating the allegation that top officials of the Energy Ministry and the Blue House had abused their powers to shut down the Wolsong-1 reactor, the country's second-oldest nuclear reactor, in order to placate Moon's nuclear phaseout policy. The Daejeon District Prosecutors' Office is currently conducting the investigation.

An investigation team of the Suwon District Prosecutors' Office is currently looking into an allegation that the administration had abused its power to issue a travel ban against scandal-ridden former Vice Minister of Justice Kim Hak-eui. The Ministry of Justice and a Supreme Prosecutors' Office's fact-finding team were accused of having illegally banned Kim, who briefly served as vice minister of justice in the Park Geun-hye administration, from leaving the country on March 23, 2019.

Justice Minister Park told the National Assembly that he tried to avoid influencing sensitive probes when he reassigned the prosecutors. "I did not order any appointments that will disturb the Wolsong-1 reactor shutdown and Kim Hak-eui investigations," he said.

Speculations still linger that Park is just playing it safe with the prosecution for the timing being. Prosecutor General Yoon's tenure ends in July, and a massive overhaul is expected to take place to remove his allies, political observers said.