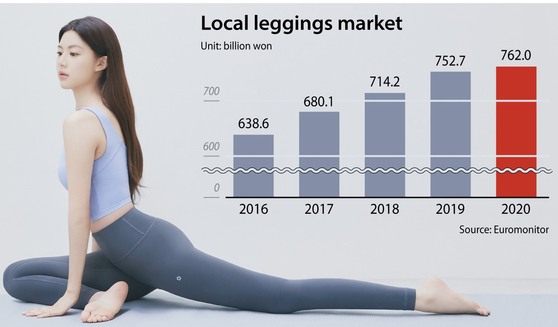 Korea’s leggings market is on the rise, and local manufacturers are holding their own against imports.

One reason for the growth is that leggings are no longer confined to sports like golf or activities such as yoga and Pilates. They're considered casual but appropriate for a quick trip to the supermarket or a cafe.

According to market research firm Euromonitor, the size of Korea’s leggings market was 762 billion won ($671 million) last year, up 1.23% percent from a year earlier. Korea is the third biggest market in the world, following the United States and Japan. From 2017 to 2019, the market has seen yearly growth of five to six percent.

The sportswear market in Korea used to be dominated by overseas brands, but leggings are an exception. Last year, three Korean manufacturers – Andar, Xexymix and Mulawear – earned combined revenues of 230.7 billion won, accounting for 30.3 percent of all Korean leggings sales.

Leggings started to become accepted as everyday wear in Korea in the mid-2010s. After Korean actress and model Clara tossed a ceremonial baseball pitch in 2013 wearing black and white striped leggings, the product category caught on as a fashion item that emphasized a woman's curves. The body positivity movement in Korea also helped women feel comfortable wearing leggings in everyday life.

Kim Nan-do, a consumer studies professor at Seoul National University and author of “Trend Korea 2021,” has identified 10 keywords or phrases for this year. “Your daily sporty life” was one of them. It refers to young Koreans' interest in healthier living and enjoy playing sports. Leggings fit into that lifestyle idea and have become a must for many young women. Working out is considered a kind of accomplishment, and leggings are a badge to show off such efforts,

Local sportswear brands are focusing on new looks and improvement of some basic features as a way of attracting customers.

Andar has removed the front rise seam in its leggings so it doesn't emphasize the crotch region. Xexymix added an additional lining of fabric to cover the area.


Xexymix offers leggings that have additional seams on the side of the leg and in the back, making it easier for customers to stretch and move.

In a first for leggings manufacturers, Mulawear is specifically targeting women under 160 centimeters (5.25 feet). Also called  "no-cut leggings" – no tailoring required! – these leggings are shorter than normal length.