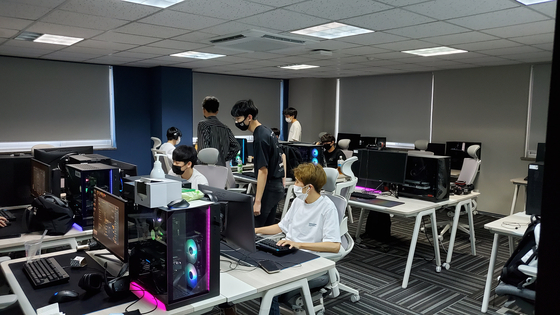 
Let's play a game. How much would you pay to receive regular online coaching in an esports title, like League of Legends? Think of a number.

But what if your coach were an accomplished ex-pro who would always leave detailed notes on your day-to-day "assignments" within 24 hours? If you could participate in weekly scrims alongside other students of a similar skill level, then receive professional-grade feedback as a team afterwards? If there were a whole curriculum's worth of pre-recorded lectures you could study in your own time? If top performers would also potentially be offered a free spot in an eight-week, LCK Academy-level boot camp with other talented amateurs?

Still no? That's perfectly reasonable. Even hardcore enthusiasts would agree that the price seems to border on the excessive, particularly when considering demographics — although things are changing, competitive gaming still remains a hobby mainly enjoyed by younger people with less disposable income.

But what if the course actually wasn't just about getting better at a video game? What if the institution also pledged to help you get into a better school by means of producing trustworthy scouting reports touting your sporting excellence? If it already had a track record of sending its students to universities abroad that offer scholarships for varsity esports players?

How, then, would the whole thing really be different from any other pricey athletic extracurricular program designed to woo Western admissions officers? 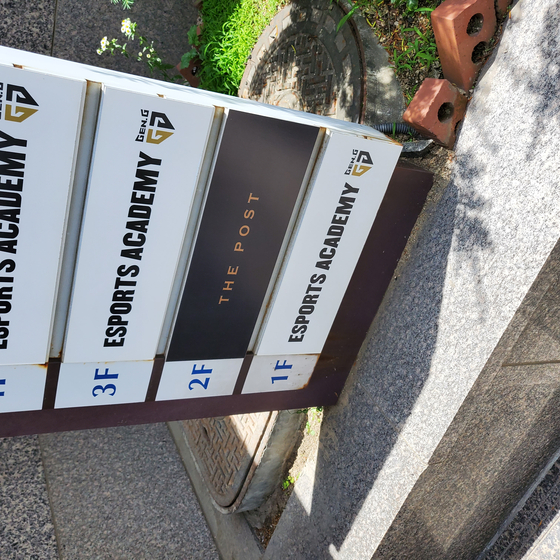 The academy's offices are located in a building separate from, but very close to, Gen.G Esports' headquarters. [JEON YOUNG-JAE]

The weather was beautiful on the day, a perfect early-summer afternoon. The Korea JoongAng Daily agreed to spend it indoors, learning about video games.

GGA president Guan Wang, who joined Gen.G last year after working for ten years in the education technology field in China and elsewhere, gave a speech at the GGA cafeteria, located on the first floor of the facility.

Wang, who says he is as "an avid gamer," described GGA Online as "our new baby" which would "empower more students who are not just in Seoul" by delivering courses "even better than offline programs, quality-wise."

Students already attending said offline programs, whose monthly fees range between 378,000 won (for a three-hour weekly seminar) and 4,930,000 won (to enroll at Gen.G Elite Esports Academy, a certified international school which runs for 72+ hours a week and grants graduates an American high school diploma), will also be using the platform and its resources as necessary.

Joseph Baek, GGA's executive director of education initiatives, shared that the online courses were developed based on a "ton of research on esports academies around the world," and were designed to address some of their shared problems, such as a "lack of quality-assured curriculum, too much reactive feedback and not being sufficiently objective-centric."

Baek, who has 15 years of experience in the education industry, claimed that GGA's competitive advantage over other esports academies in Korea was its prioritization of actual education.

Whereas competitors mostly focus on matching ex-pro coaches with pro-player wannabes, he explained, GGA offers a variety of programs designed for those looking to leverage their esports passion for other goals, such as college admissions or industry-side career opportunities.

In true school-like fashion, only after sitting through a series of lectures were attending journalists finally rewarded with an interactive experience — testing out GGA Online. We were asked to play a bottom lane 2v2 in League of Legends — first team to score a kill or reach 50 cs would win — and upload the whole clip, recorded with OBS, to the platform. Coaches upstairs would then remotely provide individual feedback on our performance, using the newly developed tools.

The mock 2v2 unfortunately only lasted three minutes, as one team scored first blood as soon as they hit level 2. Regardless, footage from those three minutes still provided enough material for the coaches to leave a number of timestamped notes. Most comments were left in the form of recorded voiceovers, with the occasional supplementary text or drawing. Students could also submit follow-up questions on comments.

The platform, which was produced by a dedicated development team based in Shanghai, was a bit under-decorated — design updates will come soon, Gen.G says — but very few hitches in functionality could be observed while it was in use.

It was also easy to imagine how these tools might take on a secondary life if adopted by esports-adjacent content creators on AfreecaTV or Twitch, where ex-pro streamers coaching their lesser skilled colleagues are an everyday occurrence.

Letting those decorated names fool around with the new coaching platform on stream may make for both good entertainment and savvy marketing. 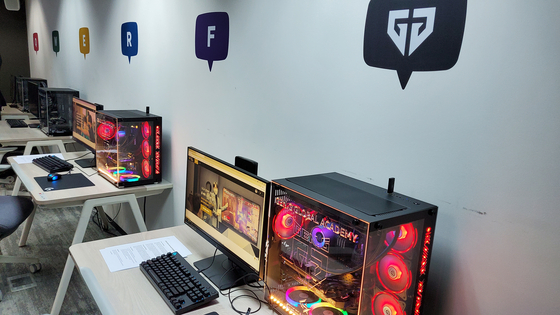 The setup that attending journalists used to play a mock 2v2. [JEON YOUNG-JAE]

GGA Online's League of Legends course had yet to feature a proper backlog of pre-recorded lectures for each skill level — the whole program was still in beta, after all — but most of the Overwatch library was already available for browsing. The curriculum looked to be well thought-out overall, but the videos themselves were rather bland in terms of production quality.

The obvious question was: Why should potential students sign up for such courses for a sizeable fee, in an age where dozens of perfectly qualified ex-pros regularly upload free, immaculately produced video guides on YouTube?

When asked, Baek fully agreed that there indeed are a great number of free resources to be found across the web. But he countered that GGA Online's pre-recorded lectures should be thought of as merely the program's "textbook," accounting for "only ten percent" of its total worth.

"I'd say the entire 'solo track' part of the program, including the individualized 'missions' (homework) and feedback system, actually only accounts for maybe 30 percent," he said. "The 'team track,' in which students work in groups, participate in scrims, learn about strategies and compositions, and receive both personal and team feedback, accounts for 70 percent."

Baek also explained that while the price point — 300,000 won a month during the ongoing beta testing period, then 500,000 won after the full launch slated for this fall — might seem high, it is still roughly in line with what GGA's competitors are charging.

For students in high school or below, the academy's claims of providing trusted scouting data and having strong working relationships with many U.S.-based colleges would be a draw of indeterminable value as well.

Precise demand for GGA Online remains to be gauged, but GGA pledged to ensure quality control in any scenario, saying that no more than 15 to 20 students would be assigned to each coach. Pamphlets distributed to press at the event listed six coaches under Overwatch and four coaches under League of Legends.

While the online nature of the program would technically allow for an instant global rollout, language barriers will be an obstacle for the time being, as most coaches contracted with GGA are only comfortable teaching in Korean.

The academy's current plan is to provide interpreters during team track sessions with overseas students, while seeking out qualified coaches from other language backgrounds to handle solo track sessions. Baek shared that GGA had already brought on a Chinese Overwatch coach. 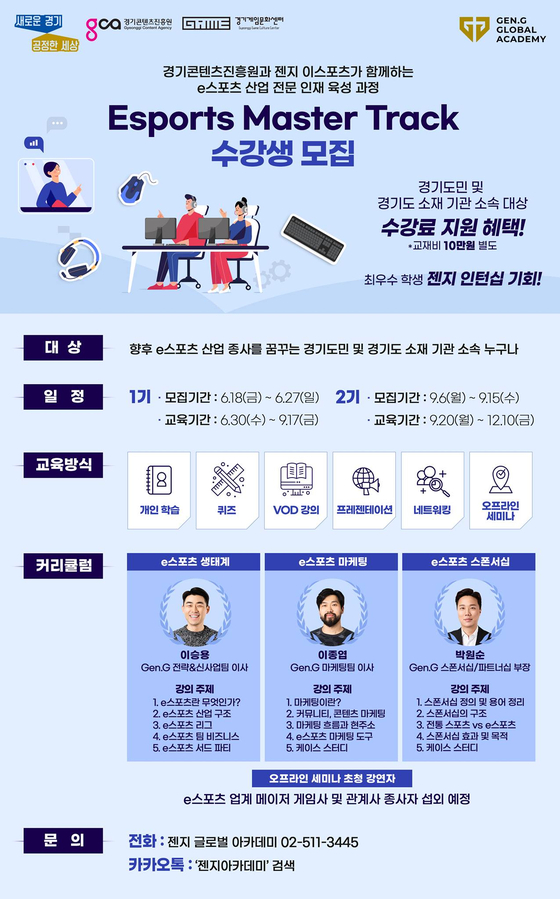 In the past few years, Korean esports in general has been grappling with the daunting challenge of trying to retroactively commercialize an industry that was previously unprofitable by design. Some efforts were successful, while others were not. Education-related initiatives are among the more promising: A number of coaching institutions have enjoyed booming business in recent years.

One social problem that may arise in the age to come is potential talent being priced out of esports. As in most sports, upcoming superstar players will most likely continue to find success with or without signing up for courses at private institutions, but the same may not hold for those a tier below, or for individuals looking to break into the industry side of the field.

Last month, the Korea e-Sports Association (KeSPA) launched an official certification program for those looking to become entry-level esports referees. Participants need to pay 500,000 won to take the course. The price includes over 20 hours of lectures, two field sessions and a uniform, but a number of people said they were deterred from signing up as they simply couldn't afford or justify the cost.

Regardless of organizer intent or economic sense, putting a more-than-trivial price on programs that lead to attractive opportunities inherently functions as a form of gatekeeping. How the industry will, or should, address this rising issue is still unclear.

Gen.G at least seems to be aware of this problem, as reflected in their recently announced partnership with Gyeonggi Content Agency that will allow 80 Gyeonggi residents to sign up for GGA's 11-week "Esports Master Track" program for a mere 100,000 won, a twelfth of what the course would cost without the agency's subsidies.

As Korean esports continues to formalize and commercialize, esports-related education ventures and governmental bodies will have to navigate increasingly tricky waters running sustainable operations while avoiding being charged with pricing out the poor. Increased governmental funding for esports programs would be one easy way to alleviate the problem.

In any case, it should be interesting to see how GGA Online's launch influences this discussion in the coming months.

KJD, Korizon to work together to boost esports coverage