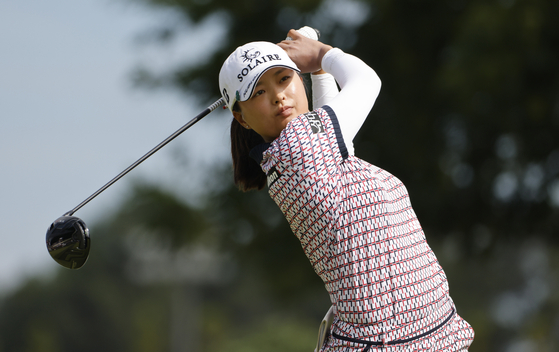 Ko Jin-young hits her tee shot on the tenth hole during the third round of the 2021 KPMG Women's PGA Championship at the Atlanta Athletic Club in Johns Creek, Georgia on Saturday. [EPA/YONHAP]

With a three-stroke victory at the KPMG Women's PGA Championship at Atlanta Athletic Club in John Creek, Georgia over the weekend, Nelly Korda of the United States is projected to move to No. 1 on the Rolex Women's World Golf Ranking when points are adjusted on Monday, or Tuesday in Korea.

Korda will be only the third American to ever top the world ranking.

Ko has held on to the No. 1 spot for nearly two years, since she won the 2019 Evian Championship. She previously held the title from April 2019 until the end of June that year.

Ko is yet to pick up a win this year. Her best finish in nine tournaments this year was tied for third at the Hugel-Air Premier LA Open in April. Her only win since 2019 was at the CME Group Tour Championship in December last year.