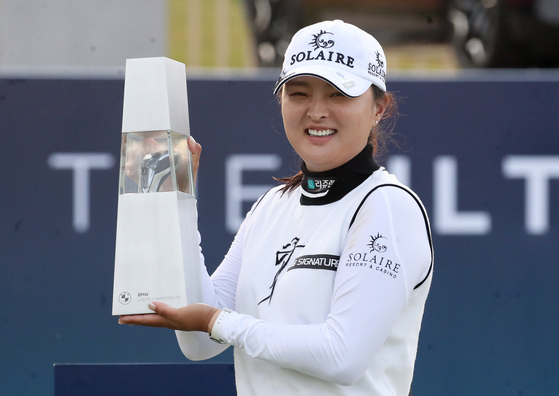 Ko Jin-young poses after winning the BMW Championship in Busan on Oct. 24. [NEWS1]


After just two weeks on top, Ko Jin-young has dropped back down to the No. 2 spot on the Rolex Women's World Rankings, losing her crown to Nelly Korda of the United States for the second time this year.

In the latest update to the women's world rankings on Monday, Korda took the top spot with an average ranking points of 9.0320. Ko fell down to second with 9.0278.

Ko started out the season as world No. 1, a position that she had been holding for a streak of 100 consecutive weeks from July 20, 2019 when she won the 2019 Evian Championship.

Despite narrowly missing out on multiple trophies toward the start of the season, Ko was able to keep her No. 1 position, finishing in the top 10 in four out of her first five tournaments. She finished in fourth at Gainbridge LPGA in February, fourth at the Kia Classic in March, tied for seventh at the ANA Inspiration and tied for third at the Hugel-Air Premia LA Open in April.

However, Ko’s form wavered slightly in June, giving Nelly Korda of the United States a chance to pass Ko and take the No. 1 title. Ko finished tied for 57th at the Meijer LPGA Classic then took 46th the following week at the KPMG Women’s PGA Championship, where Korda won her first LPGA major title and rose to No. 1 for the first time.

Ko reclaimed the top spot two weeks ago, winning the BMW Championship. No LPGA event has been held since then, but as the Rolex World Ranking is adjusted with emphasis on the most recent three months, the top spot has once again drifted out of Ko's grasp.