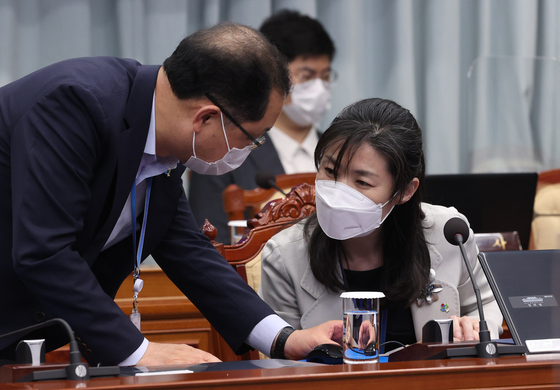 
President Moon Jae-in is facing growing pressure from both ruling and opposition parties to fire his long-time ally Kim Oe-sook, who has been in charge of the administration’s human resources management, following her repeated failures in vetting top presidential aides.

Top politicians of the ruling Democratic Party (DP) on Monday demanded that the Blue House overhaul its personnel affairs system, after Moon’s anti-corruption secretary Kim Gi-pyo stepped down last week over accusations that he had bought land using inside information.

Kim was appointed to the anti-corruption post in March as part of the government’s efforts to root out land-related corruption and inside information abuse among civil servants.

“We have to review the Blue House’s personnel affairs system to check how Kim passed the scrutiny and got appointed,” said DP Chairman Song Young-gil.

Rep. Back Hye-ryun, a member of the Supreme Council of the DP, also said Kim Oe-sook, senior presidential secretary for personnel affairs, must be held accountable for the series of botched appointments.

“She has no excuse,” Back said about Kim in an interview with MBC radio. “She should have scrutinized Kim Gi-pyo even more vigorously since he was going to be the anti-corruption secretary.”

It's rare for ruling party politicians to comment on the appointments of top Blue House officials, since Moon is the highest decision-maker.

“In the past, some accusations that cost top officials were raised by the opposition politicians as a smear campaign,” a ruling party lawmaker told the JoongAng Ilbo. “But the latest case of Kim Gi-pyo is clearly an outcome of poor evaluation.”

The lawmaker also pointed out that it was fatal for the Blue House to overlook Kim’s speculative real estate investment, although the public sentiment has already worsened by the recent Korea Land and Housing Corp. scandal that state-run housing corporation workers used inside information to make land purchases. “If no one takes responsibility for this appointment failure, it will be fatal for the ruling party in the next presidential election,” he said.

A senior DP lawmaker said Kim Oe-sook must step down to lessen the political burdens of the president and ruling party. “She must voluntarily resign,” he said.

The main opposition People Power Party (PPP) said she must be fired. “Her incompetence is irritating the people,” Rep. Kim Gi-hyeon, floor leader of the PPP, said Monday. “What she has done so far were all failures. Moon must immediately sack Kim to calm the public anger.”

The Blue House, however, defended her.

“We are aware of the demands that Kim and Senior Presidential Secretary for Civil Affairs Kim Jin-kook be held accountable,” a senior presidential aide told the JoongAng Ilbo on Monday. “But there is no discussion inside the Blue House about their fates. And I do not agree with the argument that they should be held accountable for the failed appointment.”

Kim Oe-sook has faced fierce criticism for a series of botched appointments ever since Moon appointed her as the senior secretary for personnel affairs in May 2019. Failed appointments vetted by Kim include Oceans and Fisheries Minister-nominee Park Jun-young, who stepped down due to his wife’s dubious business practice.

Another unsuccessful appointment was Lee Yong-gu, who stepped down from the vice minister of justice post over a suspicion that he had assaulted a taxi driver and then paid the victim to destroy the evidence.

While Moon accepted resignations of top presidential aides en masse for owning multiple homes, he kept Kim last year. She sold one of her homes as of March this year.

Political observers said Moon was keeping Kim, despite her repeated failures to vet top officials, because of their 30-year-long relationship. Since 1992, she worked for a law firm jointly established by Moon and the late President Roh Moo-hyun, in Busan.