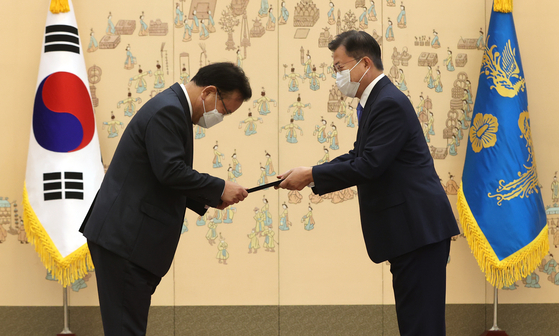 President Moon Jae-in, right, hands an appointment letter to Prime Minister Kim Boo-kyum at a ceremony at the Blue House on Friday. [YONHAP]

Moon also appointed Lim Hye-sook as minister of science and ICT and Noh Hyeong-ouk as minister of land, infrastructure and transport, although the National Assembly did not confirm either of their nominations.

According to the Blue House, their tenures started Friday.

After some lawmakers from the ruling Democratic Party (DP) asked Moon to give up at least one of the nominees as a political gesture to the opposition, Park Jun-young, nominated to head the Oceans and Fisheries Ministry, abandoned his nomination on Thursday. Park accepted criticism that he was unfit to serve due to his wife’s dubious business practices.

With the appointments of Lim and Noh, the number of minister-level officials Moon has appointed without opposition parties’ agreements increased to 31. PPP lawmakers held a rally outside the Blue House Friday to protest Moon’s ignoring of them. 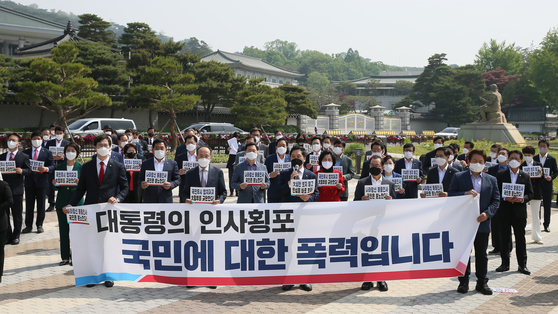 Lawmakers of the People Power Party hold a rally outside the Blue House on Friday to criticize Moon's appointments of controversial cabinet members. [NEWS1]

Moon also had tea with newly elected leaders of the DP, including Chairman Song Young-gil, at the Blue House on Friday. He stressed the importance of unity between the Blue House and the ruling party in his final year as president, perhaps in response to the DP lawmakers’ protest. 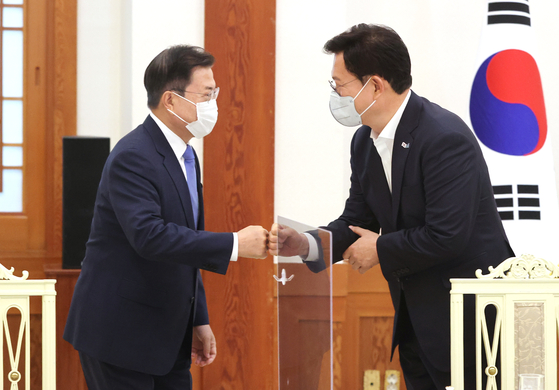 “It is the history of Korea’s political parties that an administration and the ruling party often had differences at the end of a president’s term, and the party also experienced internal power struggles ahead of  presidential elections,” Moon said. “I hope we will make a new chapter of history. The new leadership must unite the party and give hope to the people by having closer cooperation and communication among the party, government and Blue House.”

Song, who recently vowed to DP lawmakers that he will minimize the Blue House’s control over the party, told Moon that the party’s opinions must be reflected in all policies.