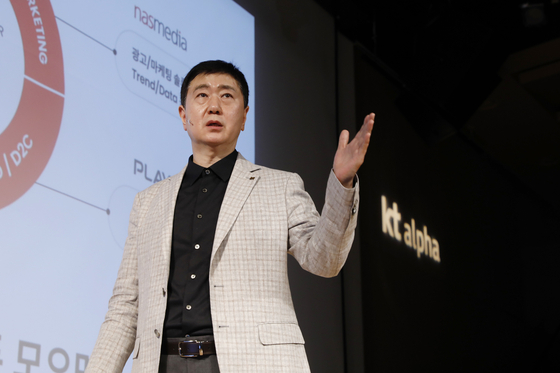 Chung Kee-ho, CEO of KT alpha, speaks at a press event in central Seoul on Wednesday to celebrate the launch of KT alpha on Thursday. [KT ALPHA]

The goal of the merger is to expand the group’s digital shopping business.

Television commerce is similar to home shopping, but most of the programs are prerecorded.

KT alpha will offer live shopping on television through K Shopping, which will be mirrored on mobile platforms, including YouTube, Naver Shopping and Kakao TV.

Live chats between shoppers and show hosts are displayed on both the mobile platforms and television.

K Shopping started the mirroring service on June 10, and it will be continued under KT alpha to appeal to younger shoppers through mobile platform and older shopper through television.

KT alpha plans to source products from small-and-medium-sized companies and to expand to Southeast Asian countries late next month.

“Competition these days is very fierce,” said Chung Kee-ho, CEO of KT alpha, at a press event held in central Seoul on Wednesday. “Strategic partnerships and share swaps [between Naver and Shinsegae Group] that exceed the level of investment made by KT alpha are being made. We are continuously in search of partners we could work with.”

Chung added that while bigger rivals are investing heavily in logistics, KT alpha will “actively use 3PL (third party logistics) because competition in logistics has already grown to a level that is difficult to directly compete against.”

3PL refers to the outsourcing of ecommerce logistics processes to a third party.

But the company believes partnerships with smaller vendors will be enough to meet its goal of 5 trillion won ($4.5 billion) in transactions by 2025.

KT alpha said it plans to offer exclusive products by discovering brands that reflect consumer demand and to develop its own private brands.

KT alpha “will become a game-changer of commerce,” Chung added. It will “actively merge and acquire [companies] to fill up the weakness.”

Details on the commissions it will receive from sellers have not yet been decided.

The commerce solution market is projected to grow 15.6 percent annually to 73.8 trillion won by 2024 compared to 41.3 trillion won last year, according to the company.